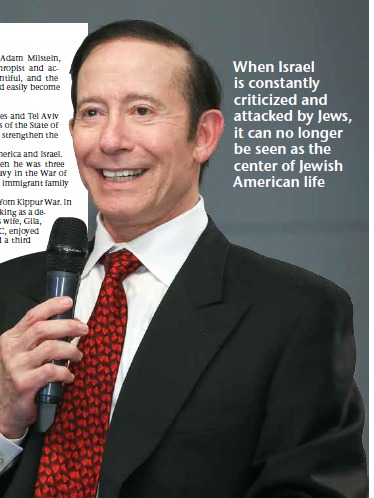 This article was originally published in the Jerusalem Post on May 19, 2022, written by Alan Rosenbaum in cooperation with the Adam and Gila Milstein Foundation.

“I am very focused on my mission,” says prominent Israeli-American philanthropist and activist Adam Milstein, “which is to fight antisemitism, the enemies of Israel, and support the Jewish people.’

“I am very focused on my mission,” says the Los Angeles and Tel Aviv resident, “which is to fight antisemitism, fight the enemies of the State of Israel, support the Jewish people and the State of Israel and strengthen the US-Israel alliance.”

Milstein was born in 1952 in Israel and served in the 1973 Yom Kippur War. In 1981, following his graduation from the Technion and working as a developer in Israel, he moved to the Los Angeles area with his wife, Gila, and their two daughters, where he obtained an MBA at USC, enjoyed a successful career in commercial real estate, and fathered a third daughter.

Adam and Gila have been staunch supporters of Israel, providing financial support to numerous organizations, launching new projects, and writing and advocating in favor of the US-Israel alliance.Milstein explains his entry into the world of Jewish philanthropy.

“Twenty years ago, after many accomplishments as a real estate investor,” he says, “I was debating whether to diversify by entering a different kind of business or become more active in philanthropy. I was looking for more challenge and satisfaction. My mission was not to continue just making more money. I wanted to do something that would give me more satisfaction – using my knowledge, resources and experience. I chose philanthropy because I wanted to make an impact in my lifetime, make a difference, and feel good about it.”

Milstein was deeply inspired when he attended the funerals of two dedicated supporters of the Jewish people, Newton Becker and Shimon Erem. He was impressed by the remarks and eulogies that paid tribute to their accomplishments.

“Like them, I want to be remembered for my contribution to the State of Israel and the Jewish people and make a difference in my lifetime,” he says.

Since his transformation from a businessman to an active philanthropist two decades ago, Milstein has found a new sense of meaning in life. He says, “I am doing the best I can in this fight. When people do nothing, they become frustrated and talk about what is wrong with everything. But despite the challenges, I continue to contribute to the best of my abilities, and I sleep well at night.”

He suggests that there are three types of philanthropy. The first type – social club philanthropy – is when people give money to become associated with a social or a business group of other like-minded, wealthy and influential people. Through their generosity, they receive a sense of belonging and a certain amount of prestige and honor.

The second type, he continues, is passion philanthropy – people give to causes that are close to their hearts. Someone may donate money to the school their children attend, the synagogue where they pray, the Jewish Community Center they frequently visit, or to the poor and sick of their community. These donations are based on emotional connections to institutions and people in need.

Milstein says that his motivation is more closely aligned with the third type of philanthropy he calls “strategic venture philanthropy,” which is tailored to making a maximum impact during a lifetime.“I don’t only give money to dozens of organizations who do good work in their fields,” he says, “but I also invest my time, experience, vision and personal connections to support them and launch new initiatives to fill the existing gaps.”

Milstein has taken a unique approach to philanthropy that, he says, few other philanthropists have taken.“People don’t understand why I support so many organizations, and [they] think I’m all over the place,” he says, “but I’m actually empowering a network. There is no silver bullet, and if you want to make an impact, you need to empower many organizations to work together to create synergy and force multiplication.”

Milstein explains that the organizations he works with benefit from funding, unique research material, and coordination, while still able to receive full credit for the work they do, raise funds and maintain their independence.Interestingly, Milstein says that donating money is more difficult than making money. He explains: “As a businessman, people develop expertise in making money, but when you give money to philanthropy, you want to make sure that it makes an impact and there is a solid return on your investment. For that, you need to have deep insight into the organizations which you are supporting. To really make an impact, you need to get involved.”

Having lived in the United States for more than 40 years, Milstein sees changes in the nature of the US-Israel relationship.

“Over the past 15 years,” he explains, “there has been an ongoing attack on the strong alliance between Israel and America from outside and within the Jewish community. Israel used to be a consensus, the glue that connected the Jewish community, and almost all American Jews supported Israel. Now we see constant attacks on Israel and its character by Jews and others on the far Left. Everything Israel is doing, they claim, is wrong.

“No one says that Israel is perfect,” Milstein continues, “but when Israel is constantly criticized and attacked by Jews, it can no longer be seen as the center of Jewish American life. Many Jewish communities push Israel aside to the point it has become inflammatory to support the State of Israel.”

Milstein says that these forces, stemming from what he calls the Islamo-leftist alliance, comprised of radical Muslims and the radical Left, attack the US-Israel alliance and all types of partnership between the two countries.He notes that until recently, congressional resolutions involving Israel would pass by a lopsided majority in favor of Israel. “Today, when you try to pass resolutions concerning Israel, dozens of votes are cast against it.” He cites an attempt to pass emergency funding for the Iron Dome missile system last year that encountered opposition in the US Congress.

“Antisemitism continues to grow in America because of the constant attacks on Israel and the US-Israel alliance,” Milstein says, adding that it is spreading with greater frequency in different forms. “It is just going to get worse, with social media spreading fake news and the media mainstreaming the biased narrative. The Jews are the ultimate victims of this.”

Milstein says that the Islamist-leftist alliance has legitimized antisemitic behavior in the United States, and he predicts that Jews on the far Left of the political spectrum who have joined the attacks on Israel will ultimately be the victims, as antisemites will not distinguish between Jews who support Israel and Jews who do not.

Milstein Executes his philanthropic vision under the Adam and Gila Milstein Family Foundation, established more than 20 years ago.

Assisted by a small but extremely efficient and dedicated staff working in Los Angeles, the Milsteins support numerous organizations that fight antisemitism and combat Israel’s enemies that threaten the US-Israel alliance, creating synergies between different groups and utilizing cutting-edge technology. “These organizations want to promote themselves, but when we show them that by collaborating with one another, they actually promote themselves and amplify their own impact, they become very interested. They need to feel that there is a win-win for them to work with other organizations.”

One organization the Milsteins have been supporting is TalkIsrael, a US-based nonprofit that focuses on cultivating a positive sentiment about Israel and the Israeli people among Gen Zers (10-24) on social media through personal, one-to-one connections, interactions, dialogue, storytelling and engagement.

Another organization that they support, Global Antisemitism Research Center (Global ARC), is an Israeli nonprofit organization that is using cutting-edge technology to monitor antisemitic content on social media platforms, such as Facebook, TikTok, Instagram, Twitter and YouTube, in six different languages, comparing content to the IHRA Working Definition of Antisemitism, documenting the antisemitic content so that it can be taken down.

“I am constantly supporting new organizations and groups who fill the cracks between the existing organizations,” says Milstein.

He says that organizations must complement the traditional methods of education and advocacy with new initiatives that go on the offensive to counter Israel’s detractors. “In order to make a personal impact, I need to choose projects that are innovative and out of the box. We are all comfortable doing nice things and helping the needy, but I want to do the things that no one else is comfortable doing – going on the offensive against our enemies at a time and place that give us the advantage.”

An example of how he has gone on the offensive, says Milstein, was his helping the research that exposed the ties between the Boycott, Divestment and Sanctions movement and terrorist groups.“Palestinian terror organizations started BDS,” he says. “Now everyone knows that BDS is not a real social justice organization. It is simply another way through which terrorist groups try to eradicate the State of Israel.”

Milstein believes that he can make a significant impact in helping Israel, given his willingness to contribute financial resources, know-how, time and experience.

What, he is asked, can the average person do to make an impact and support Israel?“Everyone can make a difference,” he says emphatically. “Get personally involved, contribute funds or make a connection. Everyone knows someone who can do more.”

He adds that everyone, regardless of their financial position, can generate unique ideas and courses of action. “I listen to people who bring new concepts, and sometimes we implement them, if it is something that is innovative and fresh. It is a great feeling when you can do something and are not just complaining. There is a lot that everyone can do, if they think outside the box.”