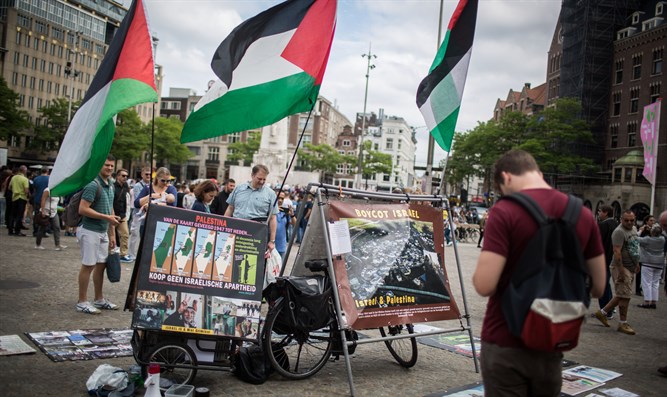 This article was originally published in Arutz Sheva on August 8, 2019.

BDS is even more dangerous than your run of the mill antisemitism. It radicalizes members of all hate movements, and by cloaking itself in a veneer of “political criticism,” this terrorist-led movement conceals its violent roots and vile aims.

Since 2010, the U.S. Department of State has had a working definition of antisemitism, sometimes updating it to adapt to new and often terrifying realities of antisemitic hatred around the world. This week, the definition, as listed on the official website, finally got the updated it needed: one that highlights the dangers of BDS and its vile antisemitism.

Now, the posted definition of antisemitism includes “drawing comparison of contemporary Israeli policy to Nazi policy” – a reaction to the deeply antisemitic rhetoric spread by BDS-supporters that Israel has become a new kind of Nazi state. Not only is that accusation blatantly untrue, it also spits on the memory of Holocaust victims and survivors and furthers the age-old antisemitic trope of Jewish conspiracy and power.

I commend the brave civil servants at the State Department, Secretary Pompeo, and Special Elan Carr for showing once and for all just how antisemitic and anti-American the BDS movement truly is. Though it’s only now being reintroduced in the State Department’s definition, for quite some time many of us have seen BDS for what it truly is: an antisemitic anti-American hate group that threats our way of life and the values we hold dear.

Since its establishment in 2001 by the major Palestinian terrorist organizations, the BDS movement has masqueraded as a nonviolent grassroots human rights organization that aims to “improve” the well-being of Palestinians. Instead of protecting the Palestinians, the movement is laser-focused on economically, culturally, and politically isolating and eradicating the State of Israel, using the model that was applied previously to the apartheid regime of South Africa.

Until recently, the BDS movement has been embraced by many around the world. It was able to hide its true intentions, building alliances with global civil rights groups. It sought protection for its hateful ideas using claims that it had freedom of speech, notwithstanding the fact it openly uses anti-Semitic propaganda that demonizes Jews living in Israel, the only homeland of the Jewish people.

This acceptance allowed BDS to promote hate and incitement to violence against Jews in Israel and everywhere. It’s the same acceptance that has allowed antisemitism to creep its way into public education in California.

In recent years, it has become increasingly evident the BDS movement is – and always has been –a front of Palestinians terrorist organizations, such as Hamas, Islamic Jihad, the Popular Front for the Liberation of Palestine (PFLP) and Fatah, which are still coordinating the major global BDS activities and have close links to many of its members and groups.

Many have come to understand that BDS is antisemitic. Even before the State Department’s new addition to the definition of antisemitism, they already defined antisemitism as animus toward Jews and cites the specific example of “denying the Jewish people their right to self-determination, e.g., by claiming that the existence of a State of Israel is a racist endeavor.” This definition is accepted by governments and organizations fighting anti-Semitism around the globe. Self-determination is recognized as a human right and Israel, the one and only Jewish State is an inseparable part of the Jewish identity.

Thus, BDS by definition is antisemitic – the new addition only emphasizes it. But that’s not all. More and more evidence shows that the BDS movement’s antisemitism not only works to deny the Jewish people the right of self-determination but also drives violence against Jews and others, globally.

The  Jerusalem Center for Public Affairs (JCPA) published a report about the BDS movement’s activities on college campuses, which revealed that Students for Justice in Palestine (SJP), the primary BDS organization on American campuses, associates with terrorist organizations while its members encourage intimidation and violence against Jewish students.

The JCPA report definitively shows that BDS promotes anti-Semitism has been a primary driver of violence and hate crimes against Jews.

Earlier this year, the Israeli government issued a report called Terrorists in Suits, which exposed the BDS movement’s links to terrorist organizations and demonstrated that BDS was established by Palestinian terror groups to eradicate the State of Israel and murder its Jewish citizens by using violent, but “non-military” means.

It provides unprecedented details about how the BDS movement was established by and continues to be financially supported and run by members of U.S. designated internationally recognized terrorist organizations. The terrorists leading the BDS movement are using military terror attacks against Jews in Israel while complementing these activities with non-military tactics to demonize and threaten Jews in Europe and the U.S.

While the antisemitic and violent nature of the BDS movement is just now beginning to become apparent in America, it is much clearer in Europe, where attacks on Jews have risen exponentially with the mainstreaming of BDS’s rhetoric. As a result, the European Union’s Justice and Home Affairs Council unanimously approved a declaration denouncing antisemitism, which focused explicitly on the denial of Israel’s right to exist that is passionately championed by adherents of BDS.

But BDS is even more dangerous than your run of the mill antisemitism. It radicalizes members of all hate movements and encourages violence. Two months ago, Germany adopted a bipartisan motion recognizing that BDS is anti-Semitic and its methods are reminiscent of Nazi-era calls to boycott Jews.  What led Germany to realize the resemblance of the BDS movement to Nazis?

The top German intelligence agency recently published its most comprehensive analysis of the rising anti-Semitism by Islamist extremists in the country addressing the rise in antisemitic attacks committed by migrants from Arab states. The Anti-Semitism in the Islamism ‘early warning’ report acknowledges that the vast majority of anti-Semitic crimes in Germany still come from right-wing extremists, but also suggests that Muslim communities – who are championing BDS in Germany – are a hotbed of hatred against Jews, infiltrated by Islamist organizations and movements and their propaganda—the kind that ferments anti-Semitic radicalization and “forms the breeding ground for violent escalations.”

This isn’t only in Germany. The NY Times recently published an article “They Spit When I Walk in the Street’: ‘The New Anti-Semitism’ in France”—detailing how French Jews are afraid to appear Jewish when walking in parts of Paris. Some supporters of Marine Le Pen’s populist right-wing party engaged in antisemitic rhetoric, yet the main source of violence in France against Jews are Muslim immigrants, many of whom are engaged in extreme anti-Israel activity.

A 2018 Austrian report on antisemitism analyzed “Imported antisemitic narratives” indicates Muslims residents consistently agreed with anti-Semitic statements more than the general Austrian population. About 65% of them agreed “If the state of Israel no longer exists, then peace prevails in the Middle East.”

Centrist and liberal opponents blame nationalist and populist parties in Western Europe for anti-Semitism. Ironically, Jews are far safer in Eastern European countries such as Hungary and Poland — where governments are controlled by right-wing populists.

It’s not just that BDS has co-opted Nazi-era anti-Semitic tactics to perpetuate hate. The movement also bolsters other fringe antisemites, like white nationalists and radical leftists, as evidenced in the recent amicus brief filed in support of the State of Arkansas’s anti-BDS law at the Eighth Circuit Court of Appeals.

The BDS movement that promotes hate against Jews is not inclusive, peaceful, or humane. It is an insidious push to legitimize antisemitism—the same hatred and bigotry that Europe and America have fought to destroy.

By cloaking itself in a veneer of “political criticism,” this terrorist-led movement conceals its violent roots and its goal of denying the Jewish people the same human rights afforded to other people around the world.

We must use anti-terrorist and anti-discrimination laws to defeat this vile BDS hatred.

We cannot let these hate-mongers destroy our academic, cultural, and political institutions. There is too much at stake – not just for Jews, but for all Americans.

We must act now to protect democracy and American values before it is too late.

Adam Milstein and his wife Gila co-founded the Adam and Gila Milstein Family Foundation providing charitable and philanthropic services to a wide range of organizations to strengthen the Jewish people, the State of Israel, and the U.S.-Israel relationship. Adam sits on the board of several national organizations such as StandWithUs, Stand by Me, and the Israeli-American Council (IAC). Adam is a “philanthropreneur,” and dedicates his time and energy toward pro-Israel and pro-American causes that fight hate, antisemitism, and bigotry on college campuses and beyond. As an active philanthropist on social media, Adam has been included in JTA’s 2019 ‘50 Jews Everyone Should Follow on Twitter,’ Richtopia’s ‘2018 100 Most Influential Philanthropists Globally’ and their ‘2017 200 Most Influential Philanthropists and Social Entrepreneurs’, The Jerusalem Post’s ‘50 Most Influential Jews of 2016’, JTA’s ‘25 Most Influential People on Jewish Twitter of 2016’, and The Algemeiner’s ‘Top 100 People Positively Influencing Jewish Life in 2015’.