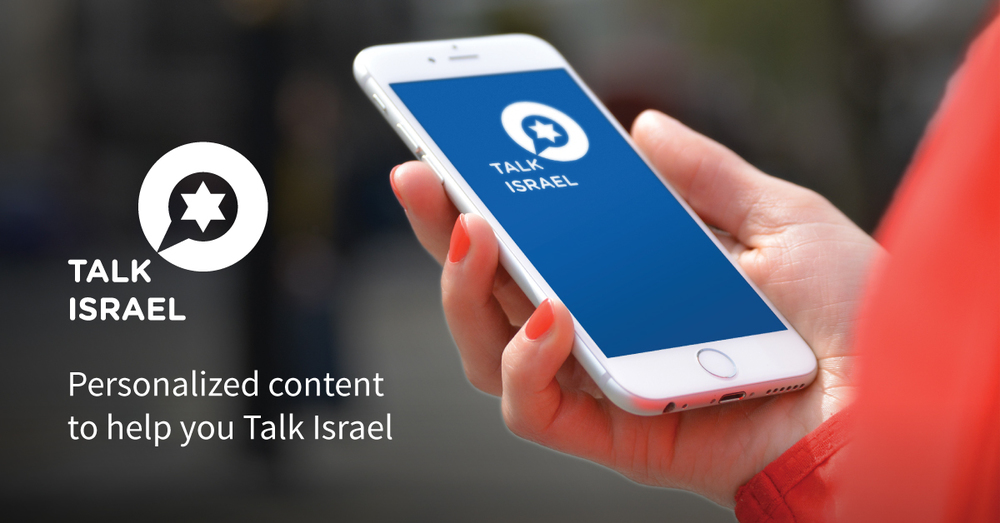 TalkIsrael, a revolutionary new app recently released by the Israeli- Council (IAC), American is the first of its kind to make finding, reading, and sharing pro-Israel content as easy as playing CandyCrush.

Users create customized news feeds on the app, choosing from topics about Israel like “science,” “culture,” “Iran,” “food,” or “sports.” The system then measures each user’s level of engagement with each piece of content so that, over time, the app automatically populates the feed with articles that are most appealing.

To determine what a user really likes, content is broken down and analyzed into approximately 50 components, including the topic, sentiment, and type of content.

The goal is to make advocating for Israel easier, and to get Israel chatter out of the echo chamber of existing supporters and in front of the eyes of a broader public – one of the biggest challenges that pro-Israel advocates face. The system’s algorithms and analyses will help organizations, and the developers, to understand which pieces of content are reaching beyond well-established audiences.

“TalkIsrael is a platform for collaboration designed to bring the entire pro-Israel community together,” said Adam Milstein, President of the Adam and Gila Milstein Family Foundation, and the National Chairman of the IAC. “To put it simply, this tool will allow the pro-Israel community to advocate on social media faster, smarter, and more effectively.”

The app’s content is aggregated from dozens of sources, using their Rich Site Summary (RSS) feeds and social media channels. Partners include the Times of Israel, ISRAEL21c, The Daily Beast, Forbes, and more than a dozen pro-Israel organizations. Many more partners are expected to sign on in the coming months.

The app was created as a non-profit, and it is free and available on Android and iPhone. It was developed by Dr. Amir Give’on, a former NASA-JPL scientist and the brains behind Jewcer, Daphna Wegner, a former DreamWorks Animation programmer, and Gadi Rouache, an award-winning creative director.

“TalkIsrael harnesses the extraordinary power of technology to determine over time what type of pro-Israel content appeals to each individual user, using that understanding to deliver the stories that they are most likely to share,” said Dr. Give’on.

“Our thesis is that everyone advocates for Israel in their own way,” said Gadi Rouache, calling the app “advocacy for the contemporary advocate; there are many lines along which to connect.”

New features and analytical tools are continually being developed for the app to assist partnering organizations and the users themselves – in the community, on campus, and online. New features will include real-time content push, geo-located content, a dynamic ‘talking points’ section, and much more.

“The TalkIsrael app helps me to stay up to date with Israel and be pro-active in spreading positive messages to my friends and networks,” said Ilan Sinelnikov, Co-Founder and President of Students Supporting Israel. “I know this app will reach a critical mass of advocates and it will help to make an impact. I’m excited to be a part of that process.”

“We want to make learning about Israel more easy, fun, and engaging,” Hadas Sella, executive director of the Milstein Family Foundation, who saw the app’s potential early on in the process. “By getting good content at the right time to the right people we can make a real impact.”

According to its founders, the app is hitting the market just in time. “If there was ever an issue to coalesce around, this is it. We are, together, absolutely more than the sum of our parts, and that’s why TalkIsrael was invented,” said Dr. Give’on.