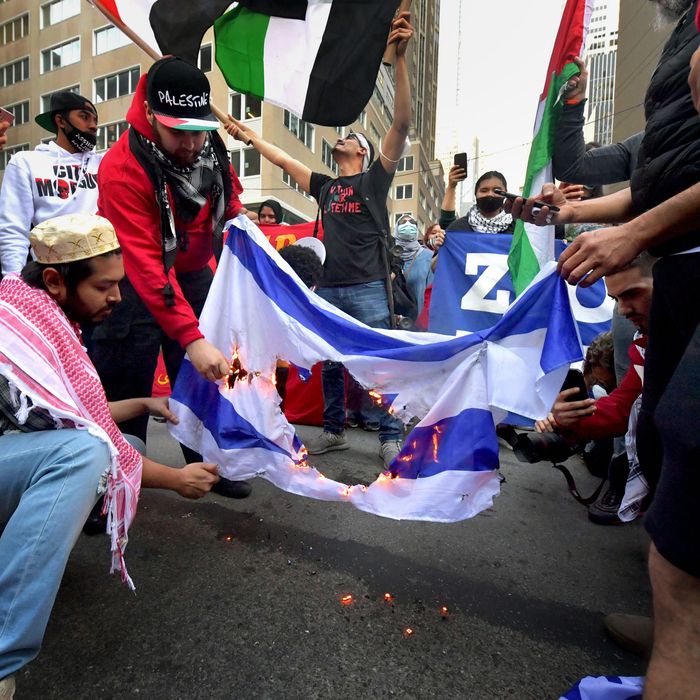 This article was originally published in the Algemeiner on July 12, 2021.

Few could have imagined that the current wave of violence against Jews in major American cities would be possible within living memory of the Holocaust.

Jews in America now fear walking the streets wearing Jewish artifacts, congregating outside Jewish community buildings, or even speaking Hebrew or Yiddish in public. Shocking and unparalleled scenes of Jews being assaulted by mobs of anti-Israel thugs in New York, Los Angeles, Boston, and other American cities, have begun to ring alarm bells.

Early in July, a rabbi sitting outside a Boston synagogue was stabbed eight times by Khaled Awad, 24, a known and violent antisemite.

At anti-Israel rallies from Europe to our major cities in America, violent and murderous slogans against Jews are regularly chanted such as “Long live intifada,” “From the River to the Sea,” and “Khaybar, Khaybar ya yahud! J’aish Mohammed sa ya’ud!” (“Khaybar, Khaybar, oh, Jews! Mohammed’s army will rise again!”–  a reference to the 7th-century Muslim massacre of the Jews of Khaybar, near Medina in the northwestern Arabian Peninsula, i.e., present-day Saudi Arabia).

This torrent of Jew-hatred has also included harassment, vandalism, and online abuse.

Not the Usual Suspects Anymore

For the most part, this onslaught of antisemitic activity didn’t come from far-right groups. It has overwhelmingly been carried out by Muslim extremists, as well as  radical leftist allies. This didn’t happen out of the blue. Activists of the Boycott, Divestment, and Sanctions (BDS) movement, which aims to delegitimize the State of Israel and promote antisemitism, have committed previous attacks against Jews in many universities and in major American cities.

As the Jewish-American community has been focused largely on the threats emanating from white supremacists, these acts of violence have been ignored and dismissed time and time again, while law enforcement agencies did not investigate or held these violent antisemites accountable.

The 2019 “The New Antisemites” report documented how the BDS movement has radicalized other hate groups, from the radical right to the radical left, and promoted violence against Jews. The American proponents of the BDS movement, including many Jews and Jewish institutions, bear responsibility for the transformation of anti-Israel vilification into the antisemitic violent attacks we have seen in recent weeks.


Over the past decade, extremists from the Islamo-Leftist alliance have become increasingly brazen and violent.

On college campuses, pro-Israel events have been disrupted for years, often violently. Anti-Israel activists have aggressively attacked and deplatformed speakers. As a result, pro-Israel speakers have been harassed, and events have had to be cancelled or required high security. This hasn’t been confined to universities.

In December 2017, pro-Palestinian demonstrators gathered in Time Square and called for violence against Jews worldwide chanting, “There is only one solution, Intifada Revolution” and “Khaybar, Khaybar ya yahud! J’aish Mohammed sa ya’ud.”

In 2018, anti-Israel extremists with criminal records aggressively disrupted an event held by the pro-Israel nonprofit Reservists on Duty at the Lincoln Square Synagogue in New York. The NYPD was immediately called to the rescue, and while they removed the disrupters from the event, the latter were quickly released, no charges were filed, and no criminal investigation took place.

It was clear that it would only be a matter of time until we saw violent acts normalized against “evil” Israel supporters. The lack of a sufficient response by the Jewish community and law enforcement — and the fact that the perpetrators were not held accountable — sanctioned their actions, and paved the way for more severe violence against Jews. This has escalated to the situation we are witnessing today of Jews being openly targeted and attacked.

The Dam Breaks: Renewed Israel-Hamas Clashes in the Age of BLM

Following the riots related to George Floyd’s death and the rise of the BLM movement, Islamo-leftist extremists who see themselves as “justice warriors” for Palestinians became empowered and more radicalized. They saw this as a justification and an opportunity to physically intimidate and attack Jews in America, without consequence.

However, those who have been arrested in recent weeks are dangerous extremists and not social justice activists.

In Los Angeles, assailants Samer Jayylusi and Xavier Pabon both have criminal records. In New York, extremist Waseem Awawdeh showed no remorse for his actions, telling one of his jailers, “If I could do it again, I would do it again.” Upon his release on $10,000 bail, Awawdeh received a hero’s welcome in his community.

Palestinian social media influencer and model Bella Hadid even shared a photograph of a radical anti-Israel rally she participated in in Bay Ridge, Brooklyn, in which violent offender Awawdeh was also pictured. She lauded these violent radicals as “beautiful, smart, respectful, loving, kind and generous” — without any consequences.

The American Jewish Community Must Go on the Offensive

We, the American Jewish community, now know the reality of the violent, antisemitic threat originating from radical Islamic and leftist extremists. It is not just about hate speech; it is now a physical threat which, as current experience has shown, will escalate even further as the perpetrators are set free with no real consequences.

We can no longer afford to dismiss this growing danger as inconsequential, and rely solely on law enforcement agencies and security guards to prevent hate crimes against the Jewish community. We must become proactive, go on the offensive, and take responsibility for protecting our loved ones.

Otherwise, we Jews in America are condemning ourselves to live in fear like our Jewish brethren in Paris, London, Berlin, and similar European cities, where antisemitic assaults are commonplace and Jewish institutions are hardened like fortresses. That is not the life I want for myself, my family, for my community, for my people, and for all Americans.