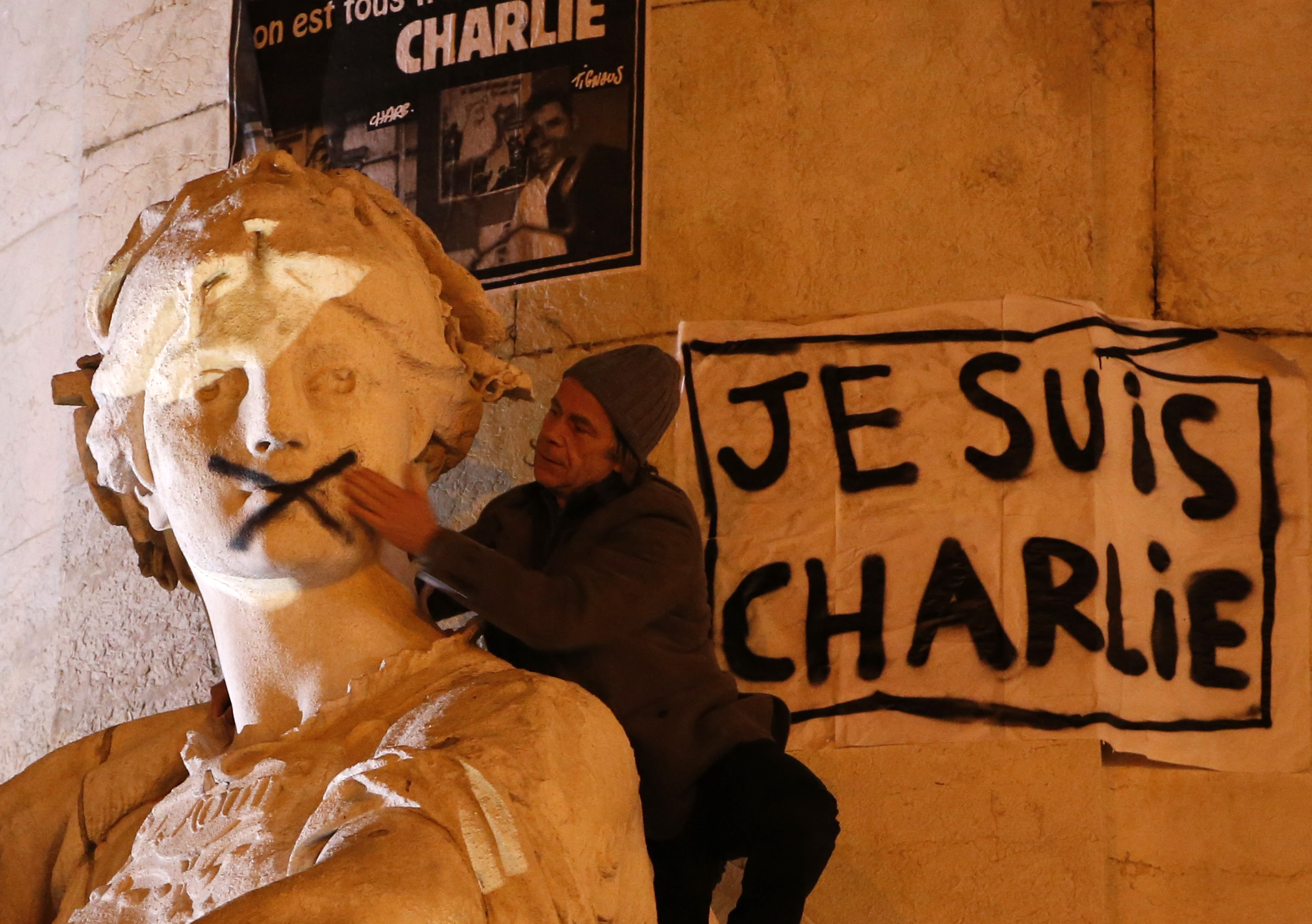 Following the Charlie Hebdo attacks in 2015, the prime minister of France, Manuel Valls, refused to use the term ‘Islamophobia’ to describe the phenomenon of anti-Muslim prejudice, because, he said, the accusation of Islamophobia is often used as a weapon by apologists for radical Islamists to silence critics. January 11, 2015. REUTERS/Charles Platiau

This article was originally published in the Jerusalem Post on May 6, 2019.

On March 5th, 2019 the House was set to vote on a resolution condemning anti-Semitism in the wake of a freshman Congresswoman Ilhan Omar’s latest hateful comments on Jews and Israel. Unfortunately, that resolution never made it to the House floor for a vote. Instead, on March 7th, a revised resolution was passed 407-23, denouncing both anti-Semitism and Islamophobia “as hateful expressions of intolerance”.

Around the same time, a resolution was introduced on the floor of the United Nations in response to recent attacks on minority groups, like the horrific murder of 50 Muslims in Christchurch, New Zealand, and the slaughter of 11 Jews at the Tree of Life in Pittsburg. Until Israel’s ambassador Danny Danon spoke out and rallied allies, the resolution only condemned Islamophobia, completely excluding anti-Semitism.

The events illustrate how anti-Semitism and Islamophobia are often framed in our discourse: as equivalent phenomena and equal dangers. This framing is both incorrect and problematic.

Let me be clear.

Bigotry, prejudice, and violence must be called out and combatted forcefully – whether it is directed at Muslims, Jews, Christians, Hindus, Buddhists, or anyone else. Those who traffic in this hatred must be marginalized and, when possible, prosecuted to the fullest extent of the law.

That said, by definition, anti-Semitism and Islamophobia refer to two very different phenomena – and should not be lumped together as one and the same.

Anti-Semitism is a race-based ideology, rooted in stereotypes – not based on fear, but ancient hatred. One popular definition, explains: “Antisemitism frequently charges Jews with conspiring to harm humanity, and it is often used to blame Jews for `why things go wrong.’”

‘Islamophobia’ as a term has existed since the nineteenth century, but became prominent in 1989 when Ayatollah Khomeini issued a fatwa following the publication of Salman Rushdie’s The Satanic Verses. The fatwa not only imposed a death penalty on Rushdie, but also criminalized all the publishers and translators of the book. When Rushdie was knighted by Queen Elizabeth II in 2007 for his services to literature, Iran accused Britain of “Islamophobia”, saying its fatwa still stood.

Since then, the Islamophobic label has been used increasingly to deter and ultimately criminalize any scrutiny of any groups or individuals who happen to be Muslim, even when those are advancing radical or harmful ideas, like Iran’s Ayatollahs.

Following the Charlie Hebdo attacks in 2015, the prime minister of France, Manuel Valls, refused to use the term ‘Islamophobia’ to describe the phenomenon of anti-Muslim prejudice, because, he said, the accusation of Islamophobia is often used as a weapon by apologists for radical Islamists to silence critics.

Like Valls, I have seen how these fabricated accusations of Islamophobia are designed to whitewash, obfuscate, and distract from dangerous and growing radical movements in the Muslim world.

Few stand up publicly today against radical Islam and those who do risk being silenced under the label of Islamophobes. The sword of Islamophobia is wielded to deliberately chill discourse and narrow the public marketplace of ideas. As a result, criticism of Islam, Muslims and related matters are censored often in favor of the Islamist.

Accusations of Islamophobia have been launched at people from Chelsea Clinton to Bill Maher. I’ve even come under attacks as an Islamophobe in response to my opposition to the Iran Deal, boycott campaigns against Israel and my support of a petition calling out Congresswomen Ilhan Omar and Rashida Tlaib for their anti-Semitism and ties to terrorism-sponsoring organizations, including the Council on American-Islamic Relations (CAIR).

I’ve been determined to speak out on this issue because I see a growing threat of radical movements silencing our freedom of speech on the left, on the right, and among Islamists in this country. Often, they work together.

For instance, vile racist, Ku Klux Klan leader David Duke, called Ilhan Omar the “most important member of the US Congress”. The left has embraced the same congresswoman, a woman who espouses anti-Semitism without restraint.

We cannot let accusations of Islamophobia silence us when we confront and defend ourselves against the radical ideologies that exist in some Muslim communities and are now growing in America. Ideologies that undermine our values and seek to destroy our way of life.

I am well aware that hatred of Muslims is a real and dangerous trend across the world. It’s killed innocent Muslim men, women, and children in New Zealand and other countries. But in the past few years, as radical Muslims organizations like CAIR and individuals like Omar and Tlaib have gained more power in America, false accusations of Islamophobia have sky-rocketed.

Today, the unfortunate reality is that any time somebody is brave enough to critique a dangerous ideology, the government of a Muslim country, or even a terrorist network, they’re silenced, shut down, and stigmatized for engaging in “Islamophobia.”

Confronting Omar, who supports CAIR and espouses anti-Semitic vitriol and hatred from the halls of congress, is not Islamophobic.

Confronting Tlaib, another supporter of CAIR, whose fundraisers have called Jews “satanic” and who wrote a column for known anti-Semite Louis Farrakhan’s publication, is not Islamophobic.

Make no mistake: each of these individuals and organizations deserves to be publicly criticized and discredited not because they are Muslim, but because they are contributing to the rise of anti-Semitism, extremism, and hate in America.

I stand in solidarity with Muslims everywhere who face prejudice and discrimination because of their beliefs. Any decent person ought to. Not only because we have a common enemy – radical forces that seek to destroy America – but also because it is the morally right thing to do.

Recently, 19-year-old white supremacist, John T. Earnest, opened fire at Chabad of Poway, killing one Jewish worshipper and injuring three more. The same suspect committed an arson attack against the Escondido Mosque a month earlier. His manifesto cited the inspiration for his attack as the white supremacists behind the New Zealand mosque and Pittsburgh synagogue shootings. All their actions are driven by radical ideologies that make no distinction between Muslim or Jew.

Adam Milstein is an Israeli-American active philanthropist. He can be reached at [email protected], Twitter @AdamMilstein, and Facebook.