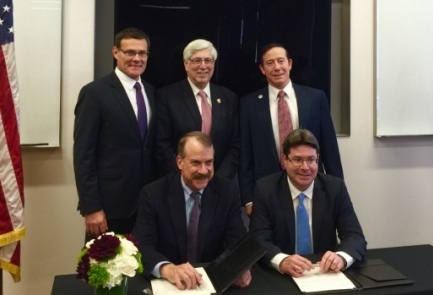 Original Article on JNS can be found here. Posted on February 10, 2016 by JNS.org.

(Israel Hayom/Exclusive to JNS.org) Israeli Science, Technology and Space Minister Ofir Akunis on Tuesday signed the first agreement of its kind between his ministry and the California Institute for Regenerative Medicine (CIRM) in the field of biotechnology, with an emphasis on stem cell research.

The biotechnology deal is the “sharpest response to all the foolish initiatives to make academics boycott Israel, including here in California,” Akunis said at the signing ceremony, adding that “anyone who boycotts Israel—the loss is all his.”

Akunis continued, “This agreement will deepen the partnership between Israel and California, bringing together our most talented scientists to push the boundaries of stem cell research and advance medical breakthroughs in the treatment of diseases ranging from cancer and diabetes, to Alzheimer’s and HIV-AIDS.”

IAC Chairman Adam Milstein said at the event that the organization is “excited by the opportunity to promote one of the most pressing issues facing humanity, and strengthen the bond between the people of Israel and the American people.”

“Israel has become an important center for stem cell research. As part of our new CIRM 2.0 approach to funding stem cell research, we want to attract the best science and most promising projects from everywhere in the world to California,” Thomas said.