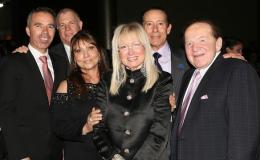 At the Israeli-American Council’s (IAC) three-day inaugural conference in Washington, D.C., last weekend, nearly 800 attendees and Washington journalists witnessed the high-profile entrance on to the public stage of what was, until recently, a quietly expanding and well-funded Los Angeles group created with the comparably modest vision of providing educational, cultural and religious resources for Southern California’s large Israeli-American community.

The IAC’s first foray into the national spotlight — and its ability to attract top politicians from both parties and their donors — points to a group on its way to becoming the go-to resource for Israeli Americans across the country and their political voice in Washington.

“We will be a growing community in the United States. We will rise to national recognition and will influence the Jewish community,” said Adam Milstein, an Israeli-American businessman and philanthropist, and a founding IAC board member.

Milstein said that the group’s goal in holding its inaugural conference in the heart of the nation’s capital was to make Israeli Americans a “brand name community in the United States and to make sure that Washington notices.” On the latter point, it undoubtedly succeeded: Political correspondents for top news outlets filled the press section to cover the IAC’s prominent speakers, including former (and possibly future) Republican presidential candidate Mitt Romney, senators Lindsey Graham (R-SC) and Robert Menendez (D-NJ), and billionaire rival political kingmakers Haim Saban and Sheldon Adelson.

That Friday evening, as a packed ballroom at the Washington Hilton enjoyed Shabbat dinner, Romney told his former foreign policy senior adviser Dan Senor, in an onstage discussion, that President Barack Obama has been “divisive and dictatorial and demeaning to our friends,” and also that Democrats were routed in the recent midterm elections partly because voters felt the Democratic candidates had been disingenuous in distancing themselves from Obama’s policies.

Meanwhile, Senor and former Sen. Joseph Lieberman both strongly suggested they would like to see Romney attempt another presidential run: “It would be doubly refreshing to hear your voice in the public debate going forward,” Senor told Romney as he concluded their discussion.

The following night’s plenary, while modest by comparison, saw Graham threaten to cut off funding to the United Nations if it “turns into the most anti-Semitic force on the planet,” and Israeli Ambassador to the U.S. Ron Dermer — who was a frequent and vocal guest on cable news during the recent Gaza war — joked that the key to a happy marriage between an American and an Israeli is for the American to “preemptively concede the argument to the Israeli spouse.”

“Then you’ll actually have a chance of having your way,” Dermer said to an admiring crowd. “Now what that means for diplomacy and U.S.-Israel [relations], I’ll leave it to all the sharp reporters in the room to figure out.”

The conference’s first two plenaries, though, were only the starter for the weekend’s highlight: the first-ever public discussion between billionaires Saban and Adelson, two of the country’s most sought-after, and generous, political donors for Democratic and Republican politicians, respectively. While their conversation, which was moderated by IAC Chairman Shawn Evenhaim, at times sounded like a debate, Saban stole the spotlight when Evenhaim asked him what he would do if he were in Prime Minister Benjamin Netanyahu’s shoes and Western powers signed a nuclear agreement with Iran that risked Israel’s security.

“I would bomb the living daylights out of those sons of bitches,” Saban said to thundering applause, striking a tone starkly to the right of Adelson, who only spoke in general terms of Israel needing to “take action” and “not just talk.” Earlier, Saban said that if such a deal is signed, he would come to the “full realization we are screwed, baby.”

Adelson, for his part, provided his own memorable remarks, sharply criticizing journalists in general and particularly The Forward’s Washington correspondent Nathan Guttman. He also cast doubt on the importance of Israel remaining a democracy and called the Palestinians “an invented people.”

Saban, a media mogul, and Adelson, a casino tycoon, then engaged in what sounded like either banter or an impromptu investment strategy session, discussing how to influence mainstream American media outlets when it comes to coverage of Israel, which Saban called “very left-wing” except when it comes to “maybe a bit the Wall Street Journal and definitely Fox News.”

“I wish that [Amazon.com CEO] Jeff Bezos didn’t buy the Washington Post,” Saban said. “It would have been nice if you and I could have bought it, Sheldon.” For $250 million — bupkis!” Saban continued, as the audience laughed. Adelson responded: “I wish I had known it was available,” then asked Saban, again to raucous applause, “Why don’t you and I go after The New York Times?”

Saban said he has tried to purchase the news giant, but that “it’s a family business” and would not sell. Adelson, sharing some corporate takeover advice with the audience, told Saban that the only way to get The New York Times would be to bid more than its worth and count on the family shareholders rejecting the offer, which would give minority, non-family shareholders a right to sue for a sale.

While marquee attractions such as Saban and Adelson provided the bang for IAC’s weekend, mornings and afternoons were filled with speakers from across the Jewish and pro-Israel world who talked about sensitive topics, especially for a group seeking to tow the line between American and Israeli and Jewish identities—such as the dilemmas facing a possible “double identity” and how to integrate Israeli Americans into the American-Jewish community.

Evenhaim, in a telephone interview following the conference, said he wants Israeli Americans to integrate within America’s broader Jewish community, but said that integration has not been a priority of the organized American-Jewish community, in Los Angeles and across the United States. “If the Jewish-American community put that as a priority for them, there probably wouldn’t be an IAC,” Evenhaim said.

At the same time, though, IAC’s goal is to help foster a unique Israeli identity among not just Israeli expats, but their American-born children and grandchildren, too. “We don’t want to become just Jewish Americans,” Evenhaim said. “The Israeli message is important to us, and it’s important to give to the next generation.”

To that end, the IAC runs programs including Celebrate Israel festivals across the country every year and Sifriyat Pijama B’America, which sends free Hebrew-language children’s books and music to Israeli-American families.

“Israel is our homeland,” Milstein said, when asked to discuss the vision of IAC in the context of America’s historical success in assimilating immigrants. “Our relationship with Israel is more unique than Italian Americans, Irish Americans, Chinese Americans — we are different.”

He said the IAC plans to become a “catchall” group for Israeli Americans, focusing not just on Israel advocacy, but eventually seeking to influence national policy on things like access to charter schools and Jewish education. “Our community has issues that are important to them, and it will be our mandate to advocate for those issues in Washington,” Milstein said.

Formed as the Israeli Leadership Council (ILC) in 2007 at the request of Ehud Danoch, the Israeli consul general of Los Angeles at the time, the ILC rebranded itself two years ago as the Israeli-American Council when its leadership realized the need to be viewed not as Israelis or as Americans, but as “Americans of Israeli descent,” as Milstein wrote in the Times of Israel one year ago. Until then, he wrote, “The State of Israel labeled us as yordim [a derisive characterization for Israelis who leave]. Americans saw us as U.S. citizens, and our children definitely didn’t want to be perceived as kids of foreigners.”

Now viewed as a potential asset by top American politicians as well as the Israeli government — as evidenced by the presence last weekend of numerous Israeli politicians and diplomats — the IAC plans to open four to six new regional councils in the next year, in addition to the existing five, and has its eyes on a 2015 conference, which Milstein said will likely again be in Washington, D.C., and, he predicts, will attract two to three times as many people.