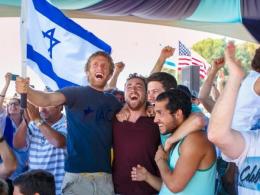 As the sun dipped below the horizon on the evening of May 6, nearly 100 local supporters of Birthright Israel gathered under a massive tent in the backyard of the Encino estate of philanthropists Adam and Gila Milstein.

Two hours later, Adam Milstein had announced a new Birthright program for Israeli-Americans and helped raise $6.5 million for Birthright — about $3.5 million for the new program — with the promise of much more.

That’s thanks in large part to casino magnate Sheldon Adelson and media mogul Haim Saban, who, together, contributed about $3.5 million. Other large contributions were made by various attendees and board members of the Israeli American Council (IAC), a Los Angeles-based group that seeks to strengthen the Israeli-American community.

At the dinner, Adelson, 80, pledged to match up to $50 million in donations made this year to Birthright and spoke broadly about his historical connection to Israel and his commitment to ensuring that any Jew who wants to go there won’t face the same fate as his father, who was too ill to go by the time Adelson and his siblings could afford to send him.

“I don’t want one Jewish person not to be able to go to Israel because they are too old and too sick,” he said.

Speaking for more than 30 minutes and passionately explaining his fear that American Jewry is vanishing, Adelson — whose support from last year is helping the IAC expand nationwide — said that Birthright is the single best guarantor of keeping young Jews interested in being Jewish. Coming seven months after a Pew Research Center survey reported an alarming decline in involvement among young Jews, Adelson’s admonition sounded particularly urgent.

At one point, he even looked at Jay Sanderson, president and CEO of The Jewish Federation of Greater Los Angeles, and predicted that, absent programs such as Birthright, Jewish communal organizations will be the first to disappear.

Today, Adelson — whose net worth is just under $40 billion, according to Forbes — is heavily invested in Jewish life in America. He told the Journal after his speech that he has given more than $240 million to Birthright since the beginning of his involvement seven years ago, when his son’s inability to reach the top of Birthright’s waitlist alerted Adelson to the fact that, because of  lack of funds, thousands of young American Jews weren’t making it to Israel. He asked Birthright’s leadership how much it would cost to clear the waitlist. Their answer was $30 million. Adelson cleared it.

His reach has extended to Jewish life in Israel in recent years with his purchase of several news outlets, including the country’s largest newspaper, Israel Hayom, and a paper of the Zionist-religious right, Makor Rishon. The new Birthright program announced by Milstein is the IAC Leadership Taglit Birthright Trip. It will be jointly run by Birthright and the IAC with the goal of reversing what he said is a trend of assimilation in the Israeli-American community. “[This is] a community that’s not connected to Jewish organizations or Jewish life,” Milstein said. “If we were not there to work with this community, there is a real probability that they will assimilate quickly. They don’t go to synagogues. They don’t get a Jewish education.”

Milstein estimates that about 1 million Israeli-Americans live in the United States. He said that Jews between 18 and 26 who have at least one Israeli parent and have spent most of their lives in America will be eligible. “When an Israeli-American comes on Birthright, the impact is probably five times more than the impact on Jewish-Americans,” Milstein said. “The reason is simple — Israeli-Americans are connected to Israel already.”

In line with Birthright’s recently loosened eligibility requirements, Israeli-Americans who previously toured the land on an organized trip before the age of 18 will not be disqualified. Even so, Milstein predicts that many of the participants will not have intimate knowledge of the land. “They don’t know the land of Israel,” he said. “They know the house of their grandma; they know the beach in Netanya.”

The new program, which will begin marketing this summer, hopes to send the first group of Israeli-Americans to Israel in the winter. A key component of the trip, Milstein said, will be regular follow-up with the participants after their return. He added that American Jews who prefer to go on a Birthright trip with Israeli-Americans will be able to apply to the program as well.