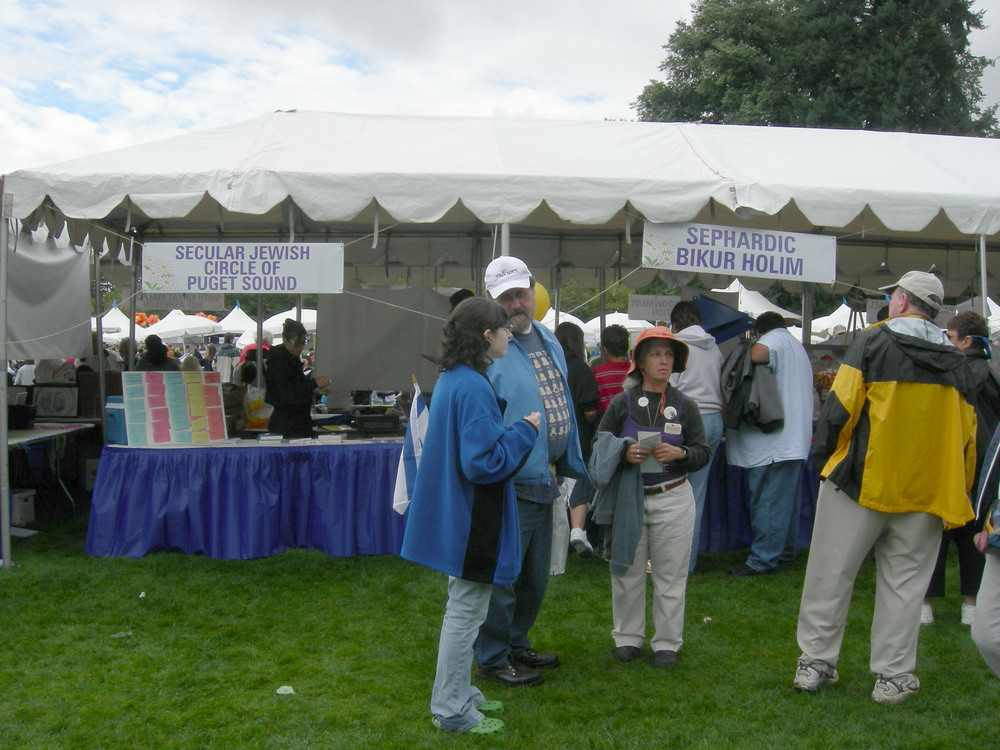 Posted on June 21, 2015 by JNS.org and filed under Features, Jewish Life, U.S..
By Maayan Jaffe/JNS.org
Caption: The Jewish Community Festival in Bellevue, Wash., in August 2007. At left is the booth of the Secular Jewish Circle of Puget Sound, which brings people together “to celebrate Jewish culture and heritage in a non-religious setting.” Surveys on American Judaism by institutes such as the Pew Research Center often ignite debates on religious vs. secular Jewish observance and identification. Credit: Joe Mabel via Wikimedia Commons.

Since the Pew Research Center released its U.S. Religious Landscape Study in May, most discussion of its findings has been quickly drowned out by other news. This is in stark contrast to the much-debated Pew survey on American Jewry that was released in October 2013.

Why the discrepancy? It’s likely because little new was discovered in the latest poll. According to the study, 25 percent of individuals raised as Jews no longer consider themselves Jewish, 35 percent of Jews who are married or living with a partner are with a non-Jew, and 39 percent of U.S. adults across religions are intermarried. The findings show that the number of U.S. adults who do not identify with any organized religion is growing, that the percentage of Americans who are religiously unaffiliated has jumped more than six percentage points (from 16.1 to 22.8), and that the majority of unaffiliated individuals are relatively young and getting younger.

The newest Pew study is just one of dozens of similar surveys published in the last decade—each with a slightly different angle, but ultimately revealing the same aforementioned trends. All the reports beg the question: Are such studies having a practical impact on the programming and services that the Jewish community is funding and delivering?

“These reports are very important,” says Israeli-born real estate investor and philanthropist Adam Milstein, head of the Los Angeles-based Adam and Gila Milstein Family Foundation. “These studies continue to highlight the fact that the American public is becoming less and less religious and that so many young Jews do not feel connected to their Jewish faith or the State of Israel. This is very concerning, and we cannot afford to ignore these facts.” 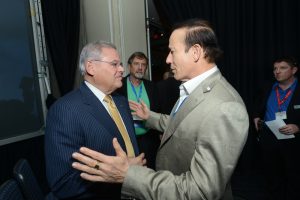 Milstein has used Jewish demographic studies to support grant-making decisions for the dozens of Jewish and Israel-related organizations that are funded by his foundation.

“I am constantly changing what I do based on the facts on the ground. Philanthropists should adjust to what is happening every year—every day,” Milstein tells JNS.org.

Shana Penn, executive director of northern California-based Taube Philanthropies, feels similarly. She tells JNS.org that the Taube foundation has “always been focused on finding unique and innovative ways to welcome the previously unengaged to Jewish life.” Studies such as the recent Pew report help Taube to ensure it is “strategic in our grant-making.”

Leading Jewish demographer Leonard Saxe, director of the Cohen Center for Modern Jewish Studies at Brandeis University, says that a quality study has the ability to help bring about change. Saxe’s center has carried out a number of surveys over the years, mostly focused on how changing conditions affect short-term and long-term behaviors.

“I look at the relationships between how a person thinks about something and then connect that to behaviors,” Saxe tells JNS.org.

There are three types of surveys or studies, Saxe says: population (as it sounds), evaluation (measuring outcomes), and opinion (attitudes). He explains that each has a different value, noting that surveys in general are less about the numbers and more about the dialogue that ensues from seeing those numbers.

“The data gave us proof to anecdotal evidence,” he tells JNS.org.

But that proof helped Hoffman, then as the federation’s chief planning and strategy officer, to harness a cadre of lay and professional leaders to address community trends.

“The objective is to collect the data because you plan to use it to inform community change,” Hoffman says.

For example, Baltimore Jewish communal leaders knew that the local population was getting older. But the community study found a much larger and increasing population of Jewish seniors over the age of 85 than expected. There were an estimated 3,900 seniors over 85 in 2010, compared with 1,500 in 1999, a 166-percent increase. More than one-third of this cohort was living in poor health and under poor economic conditions.

“We used this as an important tool to create a spark among a collective and diverse group of lay and professional leadership inside and outside the Jewish community, to get them to become aspirational on what to do to address the growing needs of seniors in our community,” Hoffman says.

Pulling together with Jewish Community Services, the local Jewish Community Center, Comprehensive Housing and Assistance, Inc. (CHAI), and area synagogues, in addition to partnering with neighborhood associations, the Northwest Neighbors Connect was launched in Baltimore to keep seniors supported in their own homes.

“Once we coalesced on a problem statement, then we moved into strategy and tactics to address the problem statement. In 10 years, we think there will be a different data point,” says Hoffman.

Baltimore also found that just 14 percent of young adults under 35 were interested in Jewish community, but that 55 percent said being Jewish was important to them. Pairing that data with another statistic—that 46 percent of Baltimore Jews found the community’s organizations “remote and not relevant”—the Jewish federation led a team to reimagine young adult engagement programming. This gave birth to Moishe House, Charm City Tribe, and other now-significant community initiatives.

Cohen Center’s Saxe has spent the last 15 years studying the Taglit-Birthright Israel program to determine its impact on participants of the free 10-day trips to Israel for Jews ages 18-26. The best way to do this, the demographer says, “is to ask people.” Over time, Saxe has polled hundreds of thousands of people—Birthright participants and non-participants—to gauge opinions about Judaism, Israel, and intermarriage, among other relevant topics. Since the program already knows a lot about its constituents, Saxe is able to cross-tabulate information to determine if there is greater engagement when young adults participate in more than one Jewish program, such as a Jewish summer camp and Birthright.

Saxes says his work contributes to Birthright’s ability to secure major donations, as fundraisers can use the survey data to help validate the quality of the program. But he warns that observers should be wary of biased studies—those that don’t truly have a random sample size or don’t ask the right questions, and those that are reported out of context.

For example, says Saxe, the J Street lobby recently published a poll claiming that American Jewish support for a nuclear agreement with Iran exceeds support for the deal among the general U.S. population, with 59 percent of Jewish respondents saying they would support a deal. Yet the poll results also showed that the most favorably viewed political figure among American Jews today is Israeli Prime Minister Benjamin Netanyahu, rather than U.S. President Barack Obama.

“That [J Street] poll is being used to argue a particular political position. But if you look at the poll in full, there is contradictory evidence,” Saxes says, referencing the fact that J Street promoted the survey’s results on Iran, but not the results on Netanyahu.

Saxe adds, “The Jewish community is paying more attention to data. There are a number of [charitable] foundations that pay close attention to surveys. That’s good and we’re getting better.”