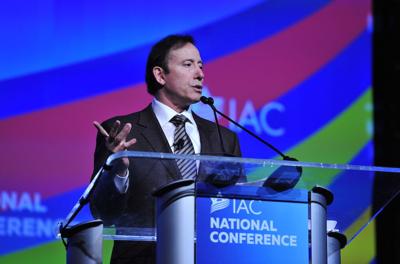 This article was originally published in Chicago Biz News on November 17, 2020.

Adam Milstein has long recognized that the future of the Jewish-American community and the U.S.-Israel relationship depends on the support of the Israeli-American community. He was one of the first Jewish leaders to widely reach the Israeli community in the early years of 2000, provide them with a unique identity and purpose, and recognize Americans of Israeli descent as “untapped strategic assets” that could drive impact.

Although the population of Israeli immigrants in the U.S. had been increasing for several decades, many ex-Israelis were not engaged in Jewish life or the pro-Israel community despite holding a strong sense of belonging to their Jewish homeland. Milstein believed there needed to be an organization with a clear mission to recognize, reach, and empower these unheard voices of Americans of Israeli descent which he defined as the Israeli-American community.

Within a few years after the IAC’s founding, the State of Israel, the American Jewish community and the American people recognized that Israeli-Americans are a powerful group, proud of their Israeli descent and American identity, which can be mobilized to help strengthen the U.S.-Israel alliance.

The organization’s activities quickly expanded nationwide, hosting heavily attended community events across the United States. Under Adam Milstein’s leadership as a founding board member and later, as the Chairman of the IAC, the organization hosted and sponsored annual conventions in Washington DC and Miami, FL, where thousands of people came together for energizing and inspiring family reunions.

They’ve organized and sponsored the annual Israeli Independence Day Festivals in Los Angeles, Boston, Miami, Chicago, San Francisco, Seattle, San Diego, and more metropolitans where tens of thousands of people came together to celebrate the independence date of the state of Israel.

The IAC has also sponsored dozens of benefit concerts with artists like Matisyahu and Moshe Peretz to inspire the act of giving and volunteering within the community. In a single concert with Ninet Tiab and students from Sderot in 2012, they raised $300,000 which was donated to smart classrooms in the Israeli town.

In addition to building its own projects and programs that scale and maximize impact, the IAC has sponsored grassroots organizations in local communities that promote the Hebrew language, Israeli heritage, leadership, and Jewish values.

The IAC developed programs for every age group from infants to seniors. Sifriyat Pijama B’America, a project founded by Adam Milstein together with his wife, Gila Milstein, in partnership with the IAC, provided free Hebrew children’s books to families so that they can learn about Jewish values. The IAC also sponsors free, after school programming for students in non-Jewish schools to learn Hebrew. Additionally, the organization’s Israeli Spirit courses for first through sixth graders teach Israeli customs and traditions, including Israeli food and music.

The IAC also supports Tzofim (Israel Boy and Girl Scouts Federation) and B’nai Akiva programs and helps establish new Tzofim tribes for high school students in America. Adam Milstein believes these programs instill pride and leadership among the next generation as they stand up in support for their Jewish homeland.

Adam, along with other active IAC leaders, founded additional initiatives for university students too, including Shagririm, Mishelanu, and IAC EDGE, formerly known as BINA. IAC EDGE convenes young Israelis and Jewish Americans for personal and professional networking and other sociocultural activities.

Today the IAC is a coast-to-coast community of engaged and activate Israeli Americans, which was Milstein’s vision at its founding. The IAC’s civic engagement and advocacy efforts include educational seminars, leadership training, and strategic partnerships.

Today, in large part due to the IAC, young Israeli Americans are at the forefront of the fight against contemporary anti-Semitism and the BDS movement. They are also active in pro-Israel leadership and advocacy on college campuses and beyond.

With Adam Milstein’s philanthropic leadership, the IAC has become a national movement that is not only preserving the Israeli brand of Jewish identity amongst Israeli-Americans in the U.S. but securing the future of the State of Israel, the United States of America, and the U.S.-Israel relationship.