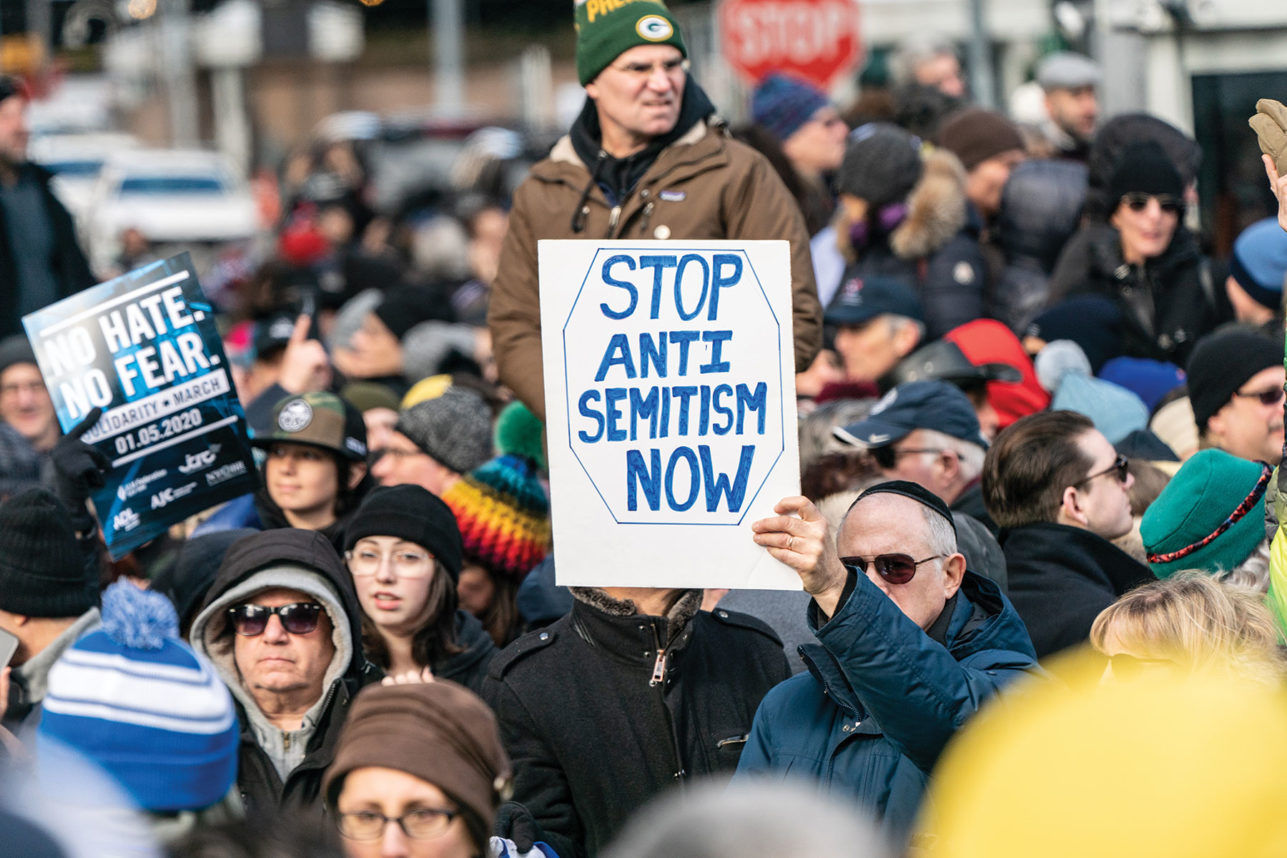 Each Passover, we sing, “Ve’hi she’amda la’avotainu ve’lanu to remind us that in every generation our detractors physically try to destroy us and HaShem is there to save us from their hands.

So, what exactly is our role in preventing the violence inflicted on us, our families and our communities? Does God want us to sit back and let Jew haters eradicate us? Does he want us to try to defend ourselves with armed guards and security walls? Or does God want us to go on the offense and try to prevent some of the violence and save lives?

If the answer is that we must act, which Jewish groups and communities should take active roles in fighting this plague? What action plans are effective in doing so? And if racism and discrimination against Jews isn’t just our problem but a threat to all Americans, how do we get the American people to join us in the fight?

Being traditionally risk averse, many Jewish leaders are calling on us to stand up, united and strong, to combat anti-Semitism with love, pride and courage. Yet, are these qualities alone sufficient to protect those we love?

While observant Jews are the easiest targets within the Jewish community today because they’re the most visible, too often they’re reluctant to join this fight. It’s not just being risk averse; many of them believe, but don’t publicly acknowledge, that fighting anti-Semitism is a losing proposition; we have almost nothing to gain but a lot to lose.

One of their most common explanations for the hesitation to actively fight back is Rabbi Shimon bar Yochai’s argument that “Halachah: beyadua she’Esav soneh leYa´akov.” Those raising this argument state the descendants of Esau (non-Jews) hate the descendants of Jacob (Jews), and there is nothing we can do about it. There will always be anti-Semites, and they will always hate Jews no matter what we do. They don’t wish to engage in a fight they are doomed to lose.

To substantiate this logic, they argue that Jews compromise only 0.2% of the world’s population and, thus, cannot possibly overcome the anti-Semitism of millions who have sought us out for centuries. They believe that although anti-Semitism is a painful disease, we can live with it.

Another common explanation used by my observant friends is that a strong Israel is our best defense against anti-Semitism. Thus, supporting Israel is equivalent to fighting anti-Semitism. They believe that if anti-Semitic violence grows out of control in the United States, we can make aliyah and find refuge in the State of Israel. In my opinion, they fail to recognize that today’s anti-Semitism is eroding American values and diminishing Americans’ support for Israel. Without a strong America, the future of the Jewish state is less secure.

But the most popular explanation, by far, is that their plate is full and they already are  supporting numerous charities. They say philanthropic resources dedicated to studying Torah and giving to the poor and the sick are higher priorities than combating anti-Semitic violence.

Furthermore, some of them say, God warned us he will bring enemies upon us to wake us up. Anti-Semitism, they argue, occurs when the Jewish people don’t follow the commandments. To substantiate this, they allude to the fact that the greatest occurrences of physical violence against Jews have taken place throughout history in countries where Jews were most assimilated, such as Egypt, Spain and Germany.

ALL JEWS ARE UNEQUIVOCALLY INSTRUCTED BY GOD TO PROTECT AND SAVE JEWISH LIVES EVEN IF IT MEANS BREACHING MITZVOT. GOD MADE NO MISTAKE IN PRIORITIZING LIFE.

These claims are easily rebutted by God’s commandment of pikuach nefesh (preservation of life). Not being prepared to combat violent anti-Semitism leaves Jewish lives vulnerable and in danger. All Jews are unequivocally instructed by God to protect and save Jewish lives even if it means breaching mitzvot. God made no mistake in prioritizing life.

Moreover, the Talmud teaches us the law concerning rodef, or the pursuer: “if someone comes to kill you, rise up and kill him first” (Sanhedrin 72a). According to Jewish teachings, both the people who are being persecuted and those around them are not only permitted but ordered to stop the attackers. Those who promote violence against Jews are our persecutors — our rodefim.

Unfortunately, Diaspora Jews — observant and secular — believe that the best use of our resources is to find someone else to protect us and fight against violent anti-Semitism. They are risk-averse, often afraid to stand up for our own communities.

Throughout the centuries, we have witnessed Jews acquiring physical security and placing their trust in non-Jewish leaders. Today is no different. Unfortunately, this strategy alone never protected us against violence in the long run. It failed us in the past and it is likely to disappoint us again in the future.

All we need to substantiate this is to look at our fellow Jews, particularly observant ones, who live in fear in France, the United Kingdom and throughout the European Union. The same anti-Semitism now occurring in Europe steadily has been creeping its way into the United States, mainly in metropolitan areas where approximately 91% of American Jews reside. Similarly, the COVID-19 crisis and some of the riots after George Floyd’s death while in police custody, have amplified global anti-Semitic conspiracy theories blaming Israel and Jews for spreading and profiting from diseases and racial inequality.

Right now, radical movements are exploiting America’s vulnerabilities to destroy and divide us. The Jews are a clear target as Jewish businesses and institutions are under violent attack. Yet, in the face of this vile hatred, some members of our community keep dismissing the underlying danger to Jews and failing to recognize that anti-Semitism will only get worse.

There is no more time for excuses not to take action.

Time and time again, we see that when Jews have the courage to fight for themselves, they prevail. From biblical heroes such as Moses, Nachshon ben Aminadav, the Maccabees, Mordecai and Esther, to the partisans and ghetto freedom fighters, to the Israeli Defense Forces, this truth is never disproved. More importantly, in each case, it was not God alone who saved us from evil. We, too, played an integral part in fighting back.

Even if fighting violent anti-Semitism was assumed to be futile and counterproductive in the past, today it is an opportunity. Unlike our ancestors of blessed memory, nowadays American Jewry is strong and has the means to defend itself. God willed us the courage to fight our enemies and blessed us with three great unique advantages.

First, the State of Israel. It is the most dynamic and powerful shield that the Jewish people have ever known. It is dedicated to safeguarding the Jewish people, wherever they are in the world. The Jewish state is also America’s greatest ally because we share democratic Judeo-Christian values and face common enemies. We need to champion the U.S.-Israel alliance and combat anti-Semitism in the U.S. to keep the bilateral relationship strong.

Second, the American-Jewish community is the most successful immigrant community in the history of the U.S. Unfortunately, many of our members are hesitant to use their resources to fight anti-Semitism. We must transform our mindset from risk-averse to going on the offensive.

Third, we must expose the fact that Jew-hatred is not just a Jewish problem. It is first and foremost an American problem. Hatred, racism and bigotry threaten America’s greatest values: life, liberty and the pursuit of happiness.

After we understand our enemies, we can effectively combat them. We must use this knowledge to implement out-of-the-box strategies that go on the offensive against hatred and put violent bigots on the defensive.

For those who want to be proactive, the time is now. We cannot let this bigotry destroy our way of life, in America, or anywhere else in the world.

Adam Milstein is an Israeli-American philantropreneur. He can be reached at [email protected], on Twitter @AdamMilstein, and on Facebook. A version of this story appeared on Jpost. Reprinted with permission.