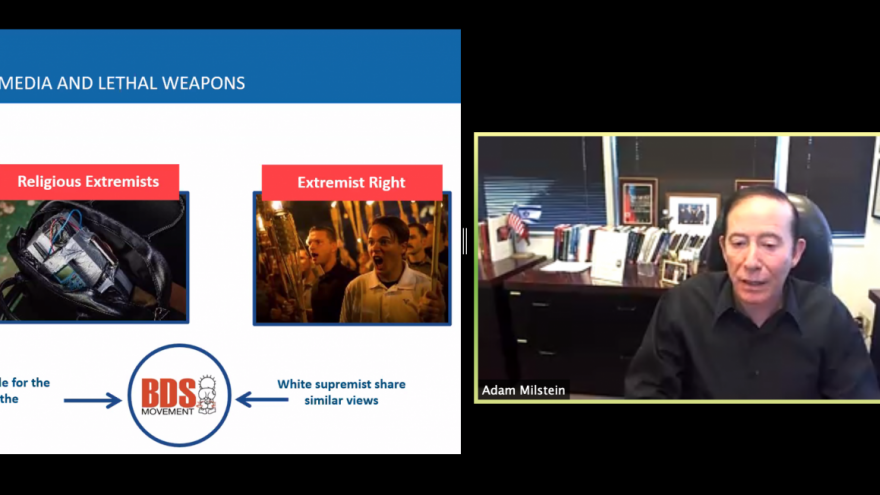 This article originally appeared in JNS on December 17, 2020.

The best chance to fight anti-Semitism in the United States is by elucidating the connections between the hatred of Jews and anti-American sentiments, according to philanthropist, real estate developer and Jewish communal activist Adam Milstein, who held a webinar on Wednesday hosted by the Los Angeles Holocaust Museum.

Milstein said the Jewish community cannot combat such an age-old scourge simply by arguing about anti-Semitic messages or defining it as a “Jewish problem.” Instead, groups and movements spreading hate need to be addressed and targeted directly.

What is needed, he added, is for others to understand that at the core, anti-Semitism is about hatred and bigotry.

Crucial to such coalition-building is gathering facts to use against hate groups in the media and the court system, said Milstein, who in addition to holding dual U.S.-Israeli citizenship serves as chairman emeritus at the Israeli-American Council and runs a family foundation with his wife, Gila, whose mission is to “strengthen American values, support the U.S.-Israel alliance, and combat bigotry and hatred in all forms.”

Milstein said it’s vital to invest fiscally in research to expose who is behind the hate groups, what their objectives and future plans are, and what links them together.

He noted work done in the last few years that showed the connection between the BDS movement and Palestinian terrorists. That gave cities and states the tools to argue for anti-BDS legislation.

Milstein stressed the need “to use intelligence to find the weak points—the weak background of the enemy—and then go through the legal system and the media to attack them.”