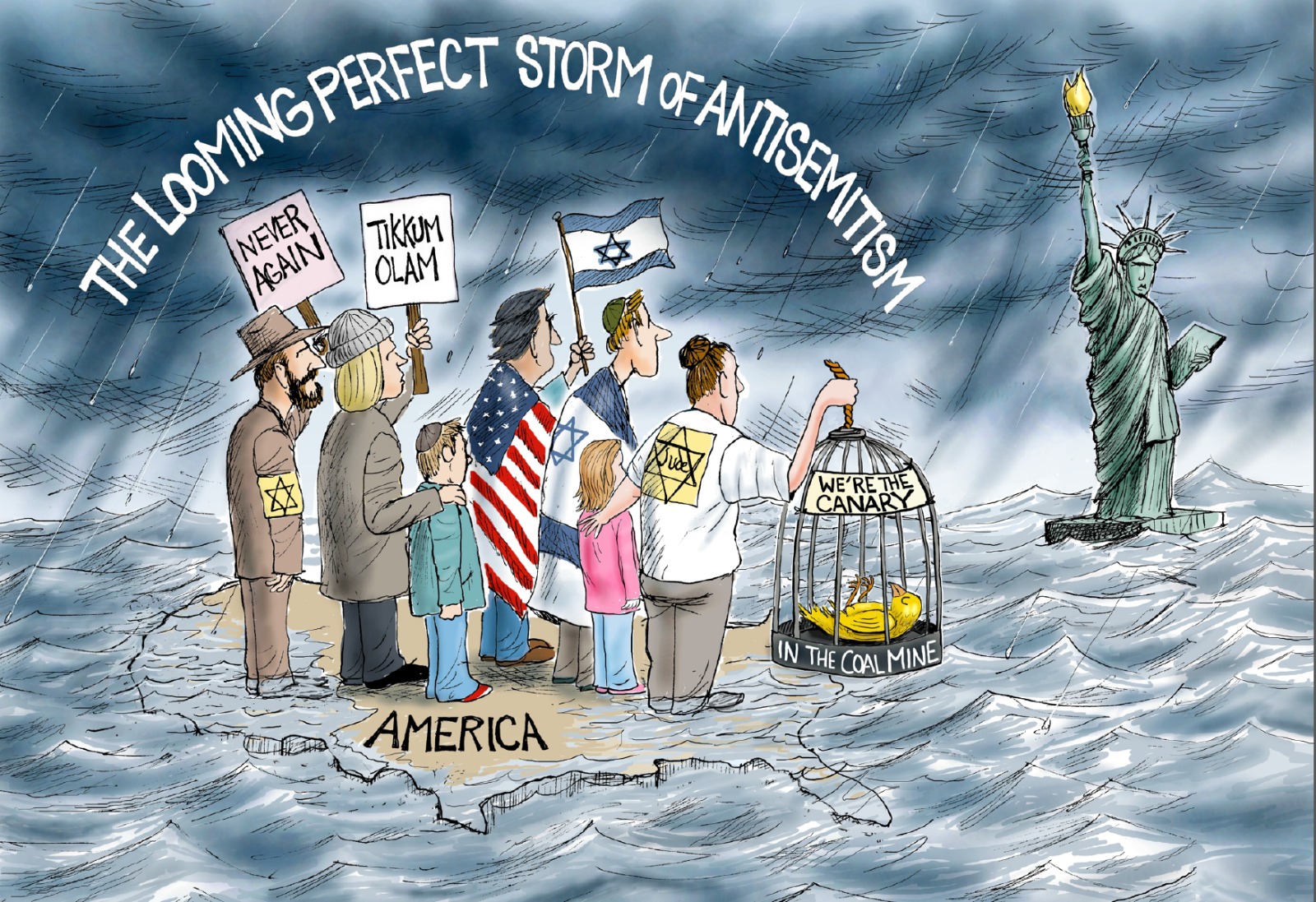 Antisemitism is not only a Jewish problem; it’s an American problem that we must fight together. Opinion. The looming perfect storm of antisemitism

Facing ever-growing antisemitism in the decades following the Holocaust, the Diaspora Jewish community’s common response has been to cry “Never Again” and to describe ourselves as the “canary in the coal mine”, which implies that whatever begins with the Jews never ends with the Jews.

While these ideas are echoed by millions, words are not enough. Jewish leaders fail to realize that action is required to prevent this violent hatred from becoming “Again and Again”. We cannot allow ourselves to be helpless, expendable canaries any longer.

We know antisemitism is on the rise, and it is likely to get much worse. A perfect storm of circumstances is significantly increasing the danger. Jew-haters are taking advantage of the cracks in our society. They amplify their hateful rhetoric on mainstream media and social media and incite violence toward our communities in frightening ways without suffering any consequences.

From medieval Europe to 20th century Nazi Germany, Jews were the scapegoat for all problems. Similarly, the COVID-19 crisis has unleashed a new global antisemitic campaign blaming Israel and the Jewish people for spreading the coronavirus, orchestrating the economic turmoil, and profiting from the pandemic.

In an age of rampant conspiracy theories and polarized politics, the new antisemitism, fueled by the terror-linked Boycott, Divestment and Sanctions (BDS) movement, promotes Jew-hatred and violence globally, harboring the support of other radical movements in America: the far-right, the far-left, and the radical Muslims.

The spread and prevalence of this hatred today threatens to destroy our American religious freedom, and our rights to liberty, prosperity, and security. We must do everything in our power to stop this enormous storm before it swallows America whole.

We, as a community, must adopt several principles to win this critical battle. First, embrace and support the State of Israel without any pre-conditions. Second, harness our community’s leadership, financial resources, and influence to protect ourselves. Third, build a broad coalition with our allies to fight antisemitism and other forms of bigotry.

Financial resources are needed to support and expand existing projects and platforms that fight back and put Jew-haters on defense. Additional resources must be invested in research and technology that enable us to combat antisemitism by exposing antisemites and their illegal activities, violent plans, and networks and promptly alerting authorities, media, and the public about these threats.

Join me to make sure that “never again” is in fact never again and that we are no longer helpless, expendable canaries in the coal mine.

Let’s think outside-of-the-box and use our resources to secure the future of Jews in America. Let’s make an impact together.

Adam Milstein is a businessman transformed into an active philanthropist and a thought leader. Milstein applies business strategies to activism and invests his own financial resources in “out of the box” projects and technology aiming to actively combat the enemies of the U.S., Israel, and the Jewish people (which are all the same).

Through his commitment of time, vision, contacts and financial resources, Milstein is able to connect a wide network of research, media, and boots on the ground organizations that go on the offense and make a tremendous impact together. Over the past 10 years, several of Adam’s initiatives were described as historical game changers.

Adam is a co-founder of the Israeli-American Council (IAC), and its past National Chairman. Through philanthropy, board memberships, and professional contacts, Milstein is a major contributor to a network of organizations that influence policy makers, opinion leaders and the public.