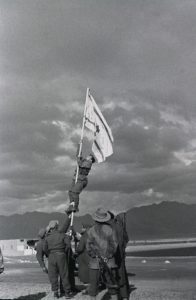 “Success is not final, failure is not fatal: it is the courage to continue that counts.” This quote, attributed to Winston Churchill, has been a secret of the Jewish people for 5,000 years.

Through ups and downs, through unbelievable triumph and unimaginable persecution, Jewish men and women in each generation have found the courage and strength to continue our traditions, protect our values and keep our faith.

Alarm bells have been ringing in Jewish communities about rising antisemitism throughout the US and Europe.

In academia, radical left-wing organizations have launched a vicious campaign of intimidation, discrimination, and attacks against Jewish students, organizations and even professors who identify as pro-Israel.

On the radical Right, Jewish and pro-Israel journalists are targeted and harassed by neo-Nazis. In the international arena, Iran, with P5+1 approval, continues to develop the very nuclear weapons it has threatened to use to eradicate the State of Israel.

How should the Jewish people respond? First, we need to foster the sense of courage in our current and future generations of Jews that we have shown before and still possess.

Yet, building courage begins by instilling pride. The Jewish People have only had the courage to persevere because our predecessors were proud of our history, our heritage, our land, our values and our achievements. If you are proud of your Jewish identity and heritage, you will be willing to fight and defend it. We must empower our children with the perspective to go out and fight for their dreams and contribute solutions to the challenges facing Jews worldwide.

This is why our family foundation invests in Jewish leadership programs that bring the young generations together around Jewish “pride of ownership” and foster a deep connection to the State of Israel. Strong families, and strong educational, cultural and social communal institutions are critical for educating the next generation with pride and confidence.

We must teach our children to be proud of their Jewish heritage and the history of the Jewish People, who, despite our tiny numbers have been able to contribute extraordinary things to the world, such as monotheism, Judeo-Christian values, modern economic theory, the foundations of psychology, the theory of relativity and more modern inventions such as Google, Facebook, Waze, Checkpoint and Mobileye.

Although we are less than 0.2% of mankind, 22% of Nobel Prize laureates are Jews. Jews constitute 12% of the US Senate, three of the nine US Supreme Court Justices are Jewish as are a large percentage of leaders in arts, business, entertainment and many other fields.

We must teach our children to be proud of the State of Israel, the homeland of the Jewish people, which has not just survived but thrived in the face of constant threats. With no natural resources, Israel has become start-up nation, a high-tech hub, a global water technology powerhouse and a beacon of hope and innovation.

Israel is the living, breathing embodiment of courage. It is the homeland of a people who achieved miraculous military victories in 1948, 1967, 1973, launched the daring Entebbe operation that rescued Jewish hostages from terrorists in Uganda and oversaw Operation Solomon to airlift 14,500 Ethiopian Jews out of harm’s way to Israel.

It is the place where a brave and determined people formed a new identity, revived an ancient language, turned swampland into farmland, seawater into drinking water and built a thriving knowledge- based economy – against all odds.

Israel’s success is rooted in the young country’s willingness to take risks – in an understanding that failure is nothing shameful, but merely an opportunity to learn and move on to your next success.

With all the challenges Israelis face – wars, political conflicts, lack of wealth and natural resources – they respond with courage and tremendous pride in their history, heritage, culture and society.

It’s no wonder then, with such a strong sense of pride and courage, that Israelis are known to be some of the happiest people in the world – ranking extraordinarily high, year after year, in the annual World Happiness Report.

What can the history of the Jewish People and the Jewish state teach us? The most powerful antidote to antisemitism will come from within our own community. As pro-boycott and anti-Israel groups seek to intimidate supporters of Israel to remain silent – and drive a wedge between the State of Israel and the Jewish People – we must remember that pride and courage are the only productive response.

So, just as we instill the value of education and Tikkun Olam (repairing the world), let’s also remember to take action to inspire courage and pride in our heritage, in our history, in our culture, in our land, and in our people.

We must communicate to the next generation that tremendous pride and willingness to stand up, speak out, and when necessary, fight back to protect ourselves when our faith, our values, and our homeland are under attack.

Nothing less than the future of the Jewish People is at stake.

The author is an Israeli-American philanthropist, national chairman of the Israeli- American Council, real estate entrepreneur and president of the Adam and Gila Milstein Family Foundation.