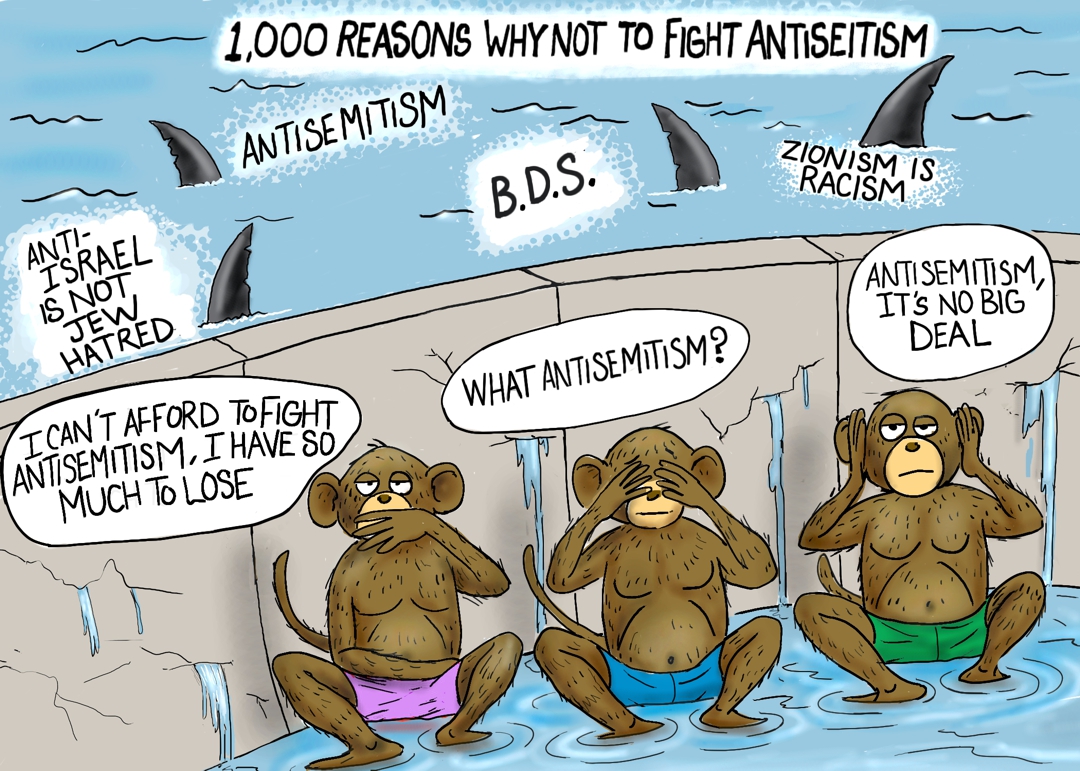 This article was originally published in the Jerusalem Post on September 11, 2021, written by Adam Milstein of the Adam and Gila Milstein Family Foundation.

Good News: Antisemitism is no longer a problem worth combatting

Dear friends and colleagues, members of the Jewish-American community:

Good News! Antisemitism is no longer a problem worth combatting.

This is the assessment of a large number of fellow Jews I’ve reached out to over the past few years. The outreach was part of my effort to recruit others to partner with me in my fight against the world’s oldest hatred, which is now, once again, inciting violence against Jews.

Although I decided to continue fighting instead of shifting to a laidback lifestyle, I owe it to you to provide some of the reasonable as well as absurd excuses I’ve heard over the years. So here it is, as expressed by some of my Jewish peers who tried to convince me that my activism is a bad idea.

We cannot afford to fight antisemitism

The number one reason many Jews avoid fighting or helping in the fight against antisemitism is because they are afraid.

The more affluent and successful my Jewish friends are the less risk they are willing to take. Standing up and fighting against our enemies expose and place us in the public domain and we become the targeted enemies of our adversaries, and that can be costly. I often hear or I am led to understand that they would like to help but they cannot afford any risk and have too much to lose. It’s much safer for their reputation, their businesses, and their wellbeing if they stay underneath the radar and hope someone else will do the job. There are many ways to stay underneath the radar and support anonymously, but any type of involvement scares them because it might leak out and be used against them.

Because they don’t want to admit that they are fearful, most use reasonable and/or absurd excuses including the following:

Are the statistics from the FBI and the DOJ documenting the significant rise in hate crimes toward Jews accurate and/or relevant?

My Jewish friends tend to evaluate the severity of antisemitism based on the personal threat of violence toward themselves and their loved ones. “Have anyone I know ever been killed or injured by antisemites?” Nope. “Have we ever been personally threatened by antisemites?” I don’t believe so. The point is, they say, let’s not exaggerate the threat and let’s find a way to live with this minimal risk, if any. Are there antisemites? Sure. But they’re a fringe, and they’ll always be a fringe, and besides, they say, the odds of being struck by lightning are much higher than the odds of me or a member of my family being subject to a violent antisemitic attack.

I’ve heard that antisemitism is like death and taxes. It’s inevitable. It’s just an unfortunate byproduct of humanity and of the Jewish experience but it prompted the survival of the Jewish people for thousands of years. Antisemitism creates Jewish unity; it has been the only point of unity among increasingly divergent Jewish communities. When Jews feel safe and prosper, they are more at risk of assimilation and intermarriage, so we need antisemitism to bring them back to their roots. So why fight it? Instead, we should be thanking Hashem and our lucky stars for this Jew-hatred. It’s all part of a divine plan that’s above our pay grade to understand.

Anti-Zionism is not antisemitism

Jew-hatred and the violence stemming from antisemitism seem like a growing problem only because we label the expanding but justified condemnation of Israel as “antisemitic.” Many told me that if we create a wedge between the diaspora Jews and their homeland, being the State of Israel, and welcome criticism of Israel, it can only lead to greater love, understanding and appreciation for Jews everywhere. Those with an unbridled love for the Jewish people but deep hatred toward Israel such as supporters of the BDS movement will accept us as respected members of society. Considering our long history of oppression, we’re rarely given a choice in anything. So, let’s be good Jews and become champions of the anti-Israel movement.

In theory, it would be great to eradicate antisemitism, but we simply don’t have enough people and sufficient resources to do so. Even if every single Jew in America donated to the cause, it will never be enough to counter the billions being poured into antisemitic campaigns. So, if our numbers and resources are limited, is it really worth dedicating so much time and money to a fight that we’ll inevitably lose? Many prefer to dedicate their limited resource to existing Jewish institutions such as schools, synagogues and social services, as well as hiring armed security services to protect our Jewish institutions and their communities.

Valuable advice rather than financial commitments

Jews are known to be smart. They are excellent in providing opinions and ideas, including on how to fight antisemitism and how to raise the necessary funds to fight it. But, when it’s time to put money where their mouth is, most prefer to stick with giving priceless advice. Most claim that they don’t have the necessary resources to help financially and those who do have such resources claim that there are many more important undertakings than to fight Jew-hatred.

Although there are many excuses and good reasons why not to fight antisemitism, there are also great advantages in doing so and now. Antisemitism is a universal problem; the enemies of the Jewish people are first and utmost the enemies of America. Hatred against Jews and/or any other minority groups in America is cancerous to our society. Thus, for the first time in several thousands of years, it’s in the best interest of Western civilization and all Americans to join together and combat this evil.

Second, we now have a strong Jewish state, the State of Israel, on our side. The people of Israel view antisemitism as a serious threat and are willing to lead the fight against it, not just observe from safety, by providing courage, resources and  innovation.

Despite the convincing excuses I’ve heard, I stay optimistic and hope that some, like me, will stop downplaying the threat, move past the fear, paranoia, and inaction, and join me in standing up and fighting antisemitism.

The writer is an Israeli-American “active philanthropist” and is working with The Jerusalem Post to fight antisemitism. He can be reached at [email protected], on Twitter @AdamMilstein, and on Facebook www.facebook.com/AdamMilsteinCP.