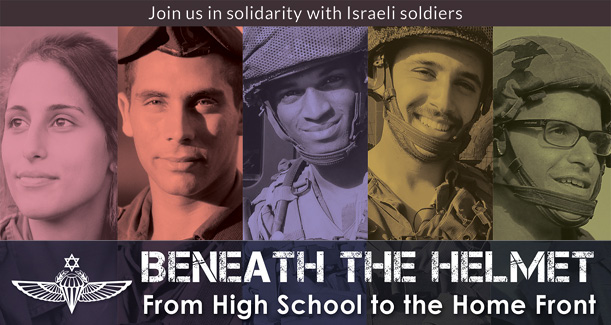 Original post can be found here: Times of Israel

The Adam and Gila Milstein Family Foundation is proud to support Jerusalem U’s film Beneath the Helmet: From High School to the Home Front, the first film to document the stories of Israeli high school graduates coming of age against the backdrop of Israel’s mandatory military service. Founder & CEO of Jerusalem U, Raphael Shore, shares how the film has reached hundreds of thousands of people, inspiring them and connecting them to Israel and the Jewish People. You can read his post below.

Generous funding from the Adam and Gila Milstein Family Foundation assisted Jerusalem U to produce and launch Beneath the Helmet: From High School to the Home Front in 2015 – and to leverage our impact and create a successful college screening campaign. We have reached 149 universities across North America and impacted more than 5,500 students through our film.

Adam and Gila’s guidance and support throughout the film’s distribution helped us to achieve incredible outcomes – connecting viewers to Israel in a deeper way, while transforming perceptions of Israel on campus.

“Beneath the Helmet reinforced why I should continue advocating for Israel – to make as big of an impact as I can.” – Ariel, Rutgers University

“The movie gave me a new appreciation for the unbelievable strength, commitment, and passion each Israeli soldier has to have to protect the state of Israel and our Jewish homeland. It made me stop and take a moment to register and question my own courage – whether I could be as brave as these men and women, who are exactly my age, and who are sacrificing everything they have for something far greater than themselves.” – Sophie Rose, gap-year student

“The students absolutely fell in love with the movie; even the next day in school, they could not stop talking about it… At a time when Israel is being attacked, especially by the youth in America, giving my students the ability to see firsthand what these soldiers go through offers another perspective of what life in Israel is really like. The students will not, mark my words, forget this experience.” – Jordan Lustman, Chairman, YULA Israel Advocacy Club

The film has now had 922 educational screenings, including 253 high schools, 149 colleges and 109 summer camps, and is available on Netflix and on El Al’s in-flight entertainment. It has also screened at 22 film festivals, including Hong Kong, “Seret,” the London Israeli Film Festival and Atlanta, the largest Jewish film festival in the world, and enjoyed a week-long theatrical run in both New York and Israel. The film came to Los Angeles with a special screening at the Saban Theater for 1,200 guests, co-sponsored by 25 local synagogues from all denominations. It had a sold-out screening and standing ovation at AIPAC’s National Policy Conference.

Beneath the Helmet has also been used to train athletes in leadership skills, and has been screened for some of the Philadelphia Eagles players, trainers and vice president, with a special address by IDF Lt. Eden. It was also screened in Cleveland with featured speaker David Blatt, former coach of the Cleveland Cavaliers.

Beyond screenings, the film has inspired a school curriculum for teens called “Basic Training,” a joint project of Jerusalem U and BBYO. In addition, some 1,100 Jewish Agency Shlichim (emissaries) have been trained to screen the film at Jewish summer camps. North American college campus screenings included four speaking tours with IDF soldiers reaching 44 campuses, including five universities in CA.

The statistics are astounding. In addition to the 84% of college students who said Beneath the Helmet inspired them, 70% of students indicated that the film offered insight into the IDF, communicated a positive narrative about Israeli soldiers and is a useful advocacy tool to promote Israel on campus – and nearly 50% of students that attended screenings were not previously engaged with pro-Israel organizations on campus

ʺBeneath the Helmet is a mind-blowing and eye-opening documentary… The soldiers in this film are very relatable and a true testament to Israel’s moral character and its diverse and equal society.ʺ – Alex Beyzer, CSUN

“The event engaged new students, educated them about Israel, and provided an opportunity to humanize IDF soldiers as real people not far different from us.” – Cameron, DePaul University

Thanks to friends and supporters like the Adam and Gila Milstein Family Foundation, Beneath the Helmet has made a tremendous impact and has also helped raise the profile of Jerusalem U, placing us among the top-tier of Jewish organizations working in this space (read more about our 2015 highlights HERE).

Hadas Sella is the Executive Director at the Adam and Gila Milstein Family Foundation. Born and raised in Israel, Hadas has a dual degree in Law and Economics from the Tel Aviv University, and is a certified attorney in Israel. After working for a top-5 law firm in Jerusalem and then as a Tax Attorney at Ernst & Young in Tel Aviv, she moved to Los Angeles in 2012 and in June 2014 graduated from the UCLA Anderson MBA program. After graduation, Hadas was recruited to the Milstein Family Foundation as a Program Director. In her role, Hadas oversees the foundation’s activities, donations, grants and operations.