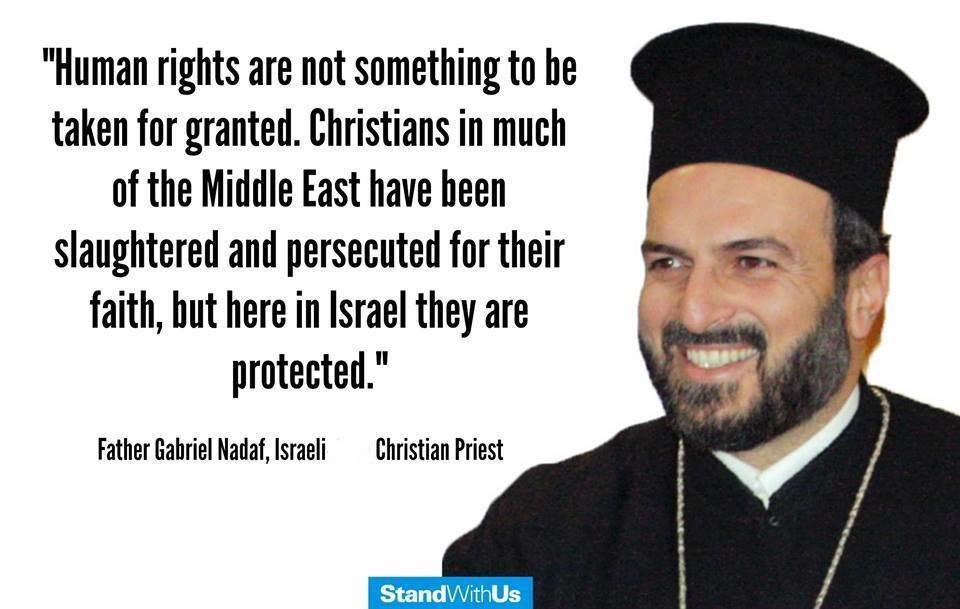 This post was originally posted on the Times of Israel Blog

Christianity’s home has always been the Middle East. Legend tells that Jesus walked the Sea of Galilee, and the Bible is infused with regional landmarks, history, and descriptors.

Yet Christians are no longer safe in their own birthplace.

The Christian community in the Palestinian territories has declined rapidly. About a century ago, the famed city of Bethlehem was 90 percent Christian, and today that number has dropped to 15 percent. In 2007, the owner of Gaza’s only Christian bookstore was tortured and murdered. Palestinian Christians regularly report feeling persecuted and harassed — sometimes fearing for their life.

The situation gets much worse elsewhere. For the first time in 1,600 years, there are no Christians left in Mosul. This once-thriving Christian community in Iraq has been completely decimated by radical Islamists – like so many others across the Middle East – with thousands fleeing their families’ ancient homes when faced with death or brutal persecution at the hands of ISIS.

The emergence of ISIS has unleashed a particularly grave turn of events for Christians. Just last month, Secretary of State John Kerry and the House of Representatives said that ISIS is committing genocide against Christians, after receiving evidence that the terrorist group has systematically slaughtered Christians “solely for their faith.” However, this represents just another sad chapter in a story of many decades of persecution, violence, and exile, which has left the population of Christians in the Middle East a small fraction of its former size.

Islamic jihadist groups are threatening Lebanese Christians and demanding that they submit to Islam. Lebanon’s Christians, descendants of Aramaic Syriacs, were the majority in the country a mere 100 years ago.

By contrast, Israel is the only country in the Middle East where the Christian community is thriving and growing. It is the one place in the region where Christians can practice their religion freely and openly.

Why do Christians find a welcoming home in Israel? First and foremost, Israel is the one place in the Middle East where democracy is enshrined, where human rights are respected, and where all minorities are protected, including Christians, Druze, Baha’is, and Samaritans. Yet, beyond this, Jews and Christians share a common history, heritage, and set of values.

Indeed, Judeo-Christian principles form the basis for all of Western Civilization – and define the way that we live in America. Today these values are under assault, not only in the Middle East, but also in Europe and America.

The same hateful ideology that causes radical Islamists to massacre Christians in Iraq, bar Christians from citizenship in Saudi Arabia, burn Coptic churches in Egypt and Christian churches in Syria, and causing local Lebanese Christians communities to worry about their existence, comes from a tradition that is now driving the demonization of the world’s one and only Jewish State.

The Boycott, Divestment, and Sanction Movement (BDS) purports to levy economic and political pressure against Israel in order to seek alleged justice for the Palestinian people. In reality, BDS is a global crusade seeded in anti-Semitic and anti-Western hatred that not only blindly attacks Israel, but also attacks our country’s commitment to our core liberal values of freedom of speech, freedom of religion, and freedom of press.

One of the most insidious features of the BDS movement is its smokescreen as a progressive, social justice movement. For that very reason, it has had great success steadily advancing its poisonous rhetoric of anti-Israel and anti-Semitic hate across our college campuses, labor unions, corporations, and academic institutions, and even our churches. But we must not be fooled: BDS was born from a radical Islamic ideology in the Middle East that not only hates Judaism, but also Christianity and America. In the same breath, those behind this wave of hate frequently chant Death to Israel and Death to America. For them, Israel is the small Satan. America is the great Satan.

Many of the leaders of the BDS movement are linked to international terrorist groups that oppress Christians in the Middle East. Hatem Bazian – one of the chief architects of BDS and the founder of “Students for Justice in Palestine,” the largest on-campus BDS organization – has been connected to a range of groups shut down by the Justice Department for raising money on behalf of the Hamas terrorist organization and other radical Islamist groups. Bazian has called for a violent uprising, in his words “an Intifada,” not only in Israel but also in the United States, and vocalized support for attacks on American troops in Iraq.

Like Bazian, Purdue University professor Bill Mullen, one of the BDS leaders who lobbied the American Studies Association to adopt a boycott of Israel, also advocates for attacking American ‘imperialism,’ saying, “We can build a still-stronger BDS movement beginning in the name of Palestinian freedom and ending in a permanent blow against American empire.”

Bazian and others not only seek to destroy the Jewish State, but also the Judeo-Christian principles on which it is founded. We have a responsibility to stand up and speak out against this wave of hate, whether it erupts in the Middle East or in the middle of America. We must unite to battle against BDS for the sake of our values, our future, and our very way of life.